Shallow Sky Object of the Month: Mizar and Alcor 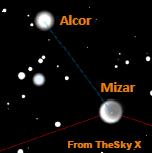 There’s more to this system than what meets the eye. But, first things first, and let’s take a look at the three stars that you’ll see in a small telescope (and you don’t have to be at a dark site to see them). The primary star is simply called Mizar and it is in the handle of the Big Dipper (asterism). It’s the second star, away from the bowl, and is at the bend of the dipper handle.

It’s easy to see and easy to find in a telescope. This beauty shines brightly and is of spectral type A1B. The sun is a G star, so Mizar is bluer, and bigger, and has a higher luminosity than the sun. The luminosity of a star is a measure of the total power output of the star and Mizar is about 2.5 solar masses and about 30 times as luminous as the sun.

The second star in the group is called Alcor. It shines at magnitude 4 and it is of spectral type A5V, so it’s only slightly redder than Mizar. Many references talk about separating Mizar and Alcor with the unaided eye — being able to do so is, supposedly, a test of good eyesight. But is it?

I found many resources that say that the magnification required to resolve a double star is equal to 480/d, where d is the angular separation of the double star (in seconds) and 480 arc seclonds is equal to 8 arc minutes (60 x 8).

So, for the magnification to be one… the separation must be 8 arc minutes — meaning that the resolving power of the unaided eye is about 8 arc minutes.

So, the Mizar / Alcor pair should be relatively easy to see with the unaided eye. Try it.

There is yet another star in this system, Mizar B, at 14.4 arc seconds from Mizar. Even low magnification will separate this star from Mizar A. Mizar B is an A class (bluish) star shining at magnitude 4, so it’s easy to see.

Each of these three stars has another companion which can’t be seen in amateur telescopes. So, all-in-all it’s a six star system.