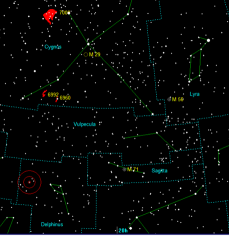 NGC 7006 was discovered by William Herschel in 1784.  It is a globular cluster in the outer reaches of the Milky Way’s halo, nearly 135,000 light years from Earth.  Due to its great distance, it appears very small, though it is very bright for its size due to the high concentration of stars.

I first observed it in 2014 with the 12.5” f/7 that used to reside in the HAS observatory.  Though that scope was generally great at resolving globulars, my log entry for 7006 read “small, round, fuzzy; no resolution, very round and fairly concentrated.”  Further research indicates a pretty good reason for the difficulty in resolving it: the cluster’s brightest individual star shines at 15.6 magnitude and most of the stars are fainter than magnitude 18!  Still, thanks to the combined light of the thousands of suns therein, the cluster should be easily visible unresolved even in fairly small telescopes.  Can you bag it?

The HAS VSIG would love to hear about your own visual observations of NGC 7006.  Send them to the VSIG list server.  To get on the VSIG email list server, contact me at [email protected].