NGC 4567 and NGC 4568 are a pair of spiral galaxies in the Virgo cluster of galaxies that are in the beginning stages of collision with one another.  They were discovered by William Herschel in 1784.  They were first referred to as the “Siamese Twins” by 19th century astronomer L.S. Copeland.  They do not show any actual visual evidence of interaction and it was once thought they may just be a line-of-sight alignment, but 21st century studies using infrared data are beginning to see evidence that the galaxies are truly interacting.

Visually, the galaxies are both around 11th magnitude and so should be visible in a modest telescope from dark skies.  They do not show any particularly notable individual details; it’s really their proximity to each other that makes the view.  At lower magnifications they will appear as a very small double oval, likely sharing the field of view with the brighter galaxies M58 and NGC 4564.  My recent log entry for these galaxies is as follows:

Two elongated ovals joined at one end; the long axes of each galaxy form about a 60 degree angle to one another; did not note any nuclear concentration in either galaxy; fairly evenly bright to the edges.

To locate the Siamese Twins, first locate the constellations of Leo and Virgo.  The heart of the Virgo galaxy cluster is located between Denebola (β Leonis, the lion’s tail) and Vindemiatrix (ε Virginis, the hand of Virgo).  Then locate the fainter star ρ Virginis to the east-southeast of Vindemiatrix (ρ is still a naked-eye star at our Dark Site).  From there you can hop slightly northeast to the considerably bright galaxy M58.  From M58, NGC 4564 is just north of it, and the twins then just north of 4564.  At 61x with an 82 degree apparent field eyepiece, I could fit all four galaxies within the same field of view.  Your results may vary with your equipment, but the point is that these galaxies are not far apart.  See the charts below for more assistance in locating these objects. 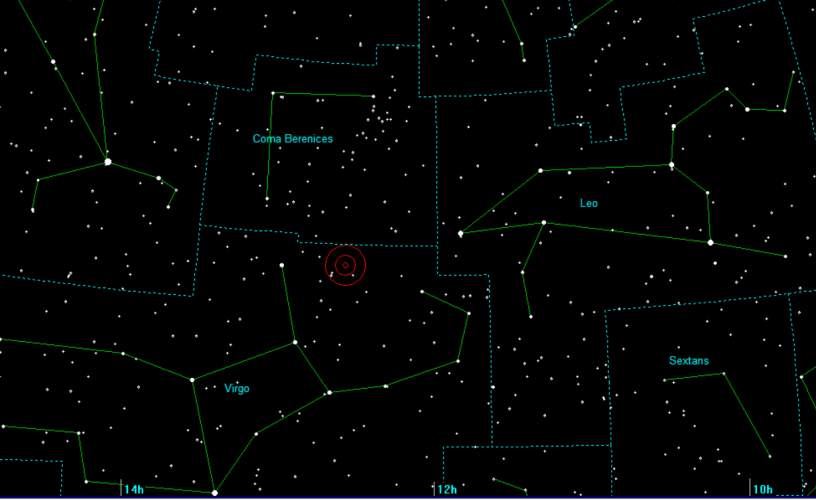 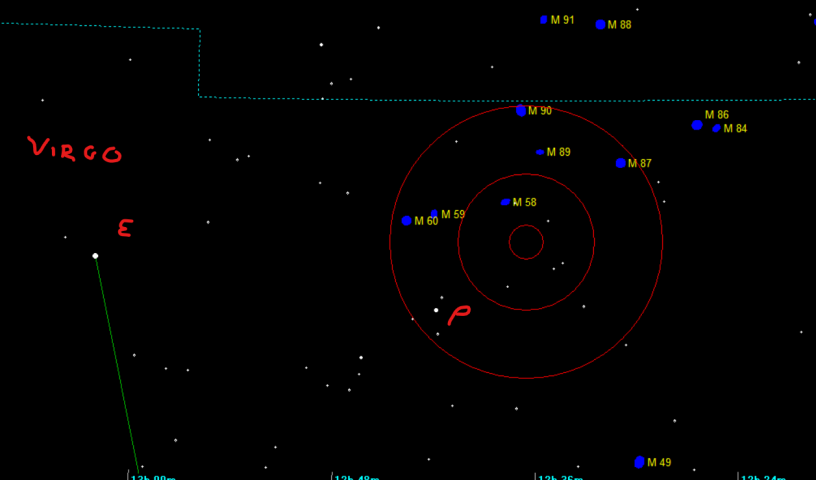