by Amelia Goldberg
This is an update on my project to get children actively involved in astronomy by giving them their own personal telescope, one designed by the child. I feel that if they have their own telescope, one they have helped to paint and decorate, they are more likely to use it.

This article is about my second telescope project. We were out at the Dark Site in mid-August.  On Saturday night, we ventured out onto the observing field to say hello to the people who were there and we met a new club member, Aparna Ambesange and her family. It turned out that I had spoken to Aparna over the phone when she called with questions about the Universe Sampler program. They had borrowed one of the loner scopes and was having trouble finding anything with it. Somehow the Telrad had gotten misaligned. Steve realigned it and we showed them a few objects in the sky. The young daughter, Roshni, had a book for kids with 50 things to see with a telescope and she talked about several of the objects in the book while we were with them. She seemed very excited and really into it. Later that night I mentioned to Steve that I thought she might be my next telescope kid.

When we got back home, I texted Aparna and told her about my project and said that I would like to do a telescope with her daughter.  We arranged for them to come to our house and I showed Roshni the telescope that she would get. I told her that I required two things from her: a name for the telescope and a color to paint it. I had picked up many paint color samples for her to look at. She asked if she could pick more than one color. I explained that we would decorate it however she wanted. She picked out 17 different colors! She wanted a stripe of 10 colors around the tube plus another for the background, 4 colors for the rocker box, one for the Telrad and another for the name letters. We scheduled working on the scope for Saturday and Sunday before Labor Day.

Painting the tube was quite involved. First, the yellow background was painted. Once that was thoroughly dry, it was taped off with painter’s tape for the 10 stripes. We painted every other color with two coats of paint. It had to dry overnight so we worked on the rocker box.  We would switch back and forth between the tube and the rocker box as things needed to dry.

The next day we took off the rest of the tape and re-taped over the painted stripes so we could paint the ones that had not been painted.

Roshni chose the name, Aurora, for the telescope. Greek mythology has it that Aurora raced across the early morning sky in her multi-colored chariot to alert her siblings to the dawning of a new day. How fitting!

By late afternoon on Monday, Labor Day, the tube and rocker box were done. They needed to dry overnight then be sprayed with a clear overcoat. I did that during the day on Tuesday. The family came back to the house after dinner and we finished up. The last thing to do was to put the rhinestones on the tube.

I must admit, at first, I thought the telescope might come out a bit gaudy with that many colors, but I was wrong. The telescope stunning! 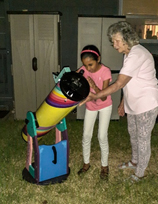 We took the telescope outside for first light. The sky was almost clouded over but Jupiter and Saturn were in the clear. The first thing Roshni saw in her new telescope was Jupiter. The second was Saturn.

From the beginning, Roshni’s parents expressed their wish to “pay it forward” where this telescope is concerned. I really appreciate their generous financial support in helping to make sure that another child gets a telescope. I also appreciate all the support I’ve received from many of you in the form of money, telescopes, eyepieces, Telrads, books, and other things. Your contributions really do help.

These kids are the future for amateur astronomy.  I want to get as many telescopes into their hands as possible. If you know of a child who shows an interest in astronomy but does not have their own telescope, please let me know about them. Hopefully someday soon, we’ll be back doing outreach and can easily spot these kids.