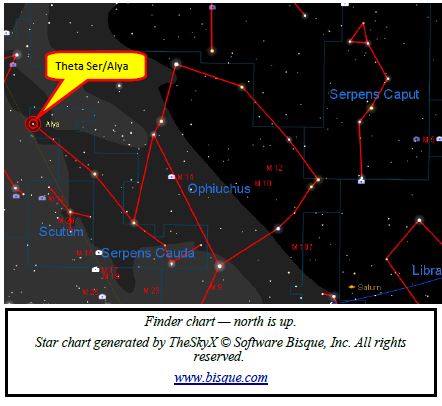 Visually, this is a terrific double star to observe. I happened on in as the result of an article by Sue French in Sky & Telescope magazine. Nice and bright, with two stars of similar magnitudes. The brighter star is only slightly brighter at magnitude 4.62 and the dimmer star is at 4.98 magnitude. These are knock-your-eyes out A class main sequence stars, with diameters twice that of our Sun and luminosities (intrinsic brightnesses) of 18 and 15 times the Sun...

If you were to plot these on the H-R Diagram they’d be to the left of the Sun (hotter and bluer — color and temperature are the same thing) and higher on the chart than the Sun (more luminosity).

If you do the trigonometry, what we can see about the distance between the stars (on the sky) and the distance to the stars tells us that they have to be on the order of 900 astronomical units apart (1 au = 93 million miles, the distance from the Earth to the Sun). Their orbital period is a minimum of 14,000 years.

There’s a ‘bonus’ star to the northeast of the bright white pair. It’s called Theta Serpens C and it’s a G star (yellow) shining at 6.7 magnitude and located 7 arc minutes from the bright pair.

The main star pair is also called Alya, which should be something like the ‘tail of the snake’ but instead is Arabic for the ‘tail of a sheep’.  Alya in Arabic also means ‘high’ and ‘holy’.

If the Earth was orbiting one of the stars in the pair, the second star would be as bright as 16 full moons, according to star expert Jim Kaler.

Theta Ser is well placed now for observing. In mid October the best time for observing this star (from the HAS site) will be between 8:00 p.m. and 8:30 p.m., although it will transit before 7:00 p.m. Look for the star just west of due south. The pair is bright enough to see from the city as well. (I have trouble finding objects from the city because there are too few stars available to provide guidance.)

Enjoy this easy and interesting pair.