Shallow Sky Object of the Month: Sun and Venus during the transit 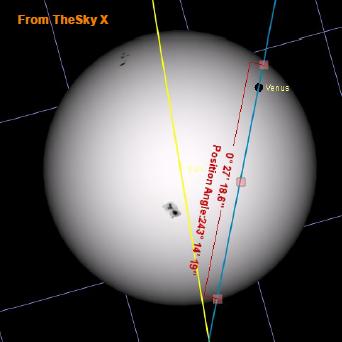 Object: Sun and Venus during the transit

After viewing the Venus transit I was talking with HAS member Bill Flanagan about the relative movement of the sun and Venus during the transit. In particular, we discussed which object, Venus or the sun, moved the most during the transit and by how much.

These motions were not along the same or parallel lines, however. In fact the angle between the two paths was about 18 degrees. What is clear is that the sun moved more on the sky than Venus did.

All these motions are as seen from the earth, of course. The apparent movement of the sun (compared to the stars) is because of the earth’s yearly trip around the sun. From our point of view, the sun moves about 1 degree in the sky each day. There are 360 degrees in a a circle, and 365 days in a year, so 360/365 so the actual movement per day is .986 degrees. The apparent movement of Venus will also include the movement of the earth during the time of the transit. To keep things simple, all of the motions discussed here are relative to the background stars (from an earthling’s point of view). 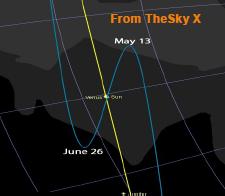 In any case, the circumstances of each transit are very similar. In each case, Venus is moving southwest in the sky and for each of the May or June events the sun is moving east and slightly north. Again, the calendar tells you that the sun moves to the north until the summer solstice (June 20 this year).

Because the December transits were before the winter solstice, the sun is moving to the east-south-east in early December; Venus was moving to the northwest at the time of the transits.

To the left is a track of the sun and Venus around the time of the 2012 transit. I’ve included the tracks of Venus (blue line) and of the sun (yellow line. The inflection points, where Venus changes its apparent direction are around May 13 and June 26. The map includes an equatorial grid (lines of RA and Dec) with north to the right.

So, power up your computer and simulate the Venus transit for yourself. Given all the moving objects involved in this transit it’s remarkable that anyone could have determined that there would be a Venus transit without electronic computers.