Original article appears in GuideStar May, 2016. 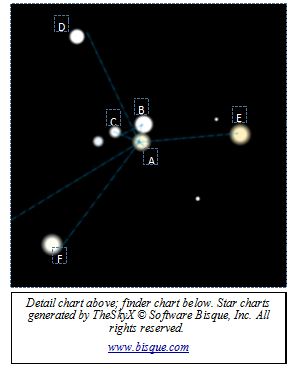 The first time I ever heard of the Stargate asterism was when I picked up a copy of John Wagoner’s 2013 observing list at the Texas Star Party. It seems that the asterism was mentioned earlier by the well known observer Philip Harrington in a May, 1998 article in Sky and Telescope magazine. (John may yet be the originator of the name, though.)

That’s not the earliest identification of this star grouping, though. I have written about the Struve dynasty of double (and multiple) stars in the past. In 1832, Otto Struve cataloged the pairs AB, AC, and BC. Additional pairs were cataloged after Otto’s death, but clearly he saw the collection of stars quite early on.

Not all of the stars in this asterism are part of the same physical system, though. That is, the stars are not all the same distance from us.

The Otto Struve catalog designation for this collection is STF 1659. (I always think of STF as being ‘Struve the father’ since subsequent Struve generations continued to catalog multiple star groupings).

You’ll need a magnification of about 100, or slightly higher, to get a good look at this asterism, so pick a telescope/eyepiece combination that provides this. I always use a wide field, low magnification combination to find objects in the sky, then I adjust the magnification as needed to get the best view.

Alright. But what is a ‘Stargate’ anyhow? Are you old enough to remember “Buck Rogers in the 25th Century”? In addition to a feature movie, there was a television series (1979-81). One of the ideas presented in the show was that there existed ‘Stargates’ that allowed travel between star systems. I suppose we think that such travel is facilitated by black holes these days.

By the way, what’s an ‘asterism’? An asterism is a grouping of stars that make a shape that is recognizable or can be associated with a known object. The most famous asterism is the ‘Big Dipper’ part of the constellation Ursa Major (the big bear).

The Stargate asterism is worth a look, easy to see, and a nice object in the sky. Hey, why not do John’s list that includes this object at the TSP this year?

Other favorite asterisms are the ‘Coathanger’ the ‘ET Cluster’ and the ‘Engagement Ring’.