Shallow Sky Object of the Month: Pollux—One of the Twins 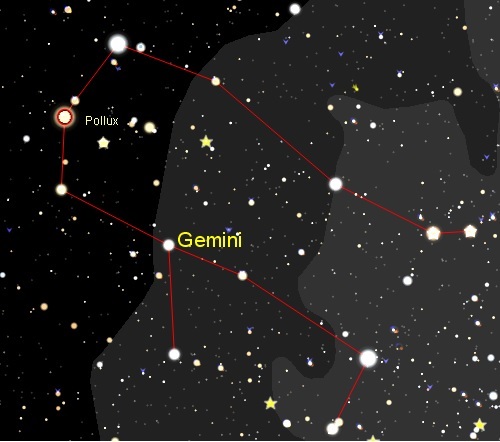 I’ve written about Castor, the other star at the head of the twins in the May, 2007 issue of the GuideStar. So, it’s time to look at Pollux and understand its place in the constellation.

I sometimes get Castor and Pollux mixed up. There are several ways to tell the difference. Castor is the more northern of the two; Castor is white and an easy to resolve double star, Pollux is orange, if you’re looking at the constellation with the twins’ heads up Pollux is on the left.

Let’s take a quick look at Pollux this month. Pollux is a low mass star, at about 2 solar masses. It is about 7.8 million miles in diameter. The star is an evolved K class (orange) star.

This star is also called Beta Gem, which should mean that it’s the second brightest star in the constellation, but it’s actually the brightest star in the constellation. Castor is the Alpha star, so it should be the brightest star, but it’s not. In fact, Pollux is about .4 magnitude brighter than Pollux so it should have been easy for early observers to determine that it should have been the alpha star. It’s unclear why this error happened, but it has been common over time to say Castor and Pollux when we talk about these two stars and because of this convention Castor was put in line in front of Pollux.

Pollux is an evolved star having used up most of its hydrogen. What color was the star when it was on the main sequence? It is believed that it was an A (white) star. Because it’s an evolved star it has consumed most of its original hydrogen by fusing it into helium. So, now it’s now in the process of fusing the helium into carbon and oxygen. What happens when the helium is used up? Will the star move on to fusing the carbon? No, it won’t, because it isn’t massive enough and it won’t get hot enough to do initiate helium fusion.

So, this star gets out of the fusion business. The final stage of a star like this is a white dwarf with, perhaps, a planetary nebula.

That’s not all. Castor has been found to have a planet. It’s one of the planets called a “hot Jupiter” meaning that it’s a planet close to the star (it’s hot) and it’s a high mass planet (like Jupiter). These kinds of planets are relatively easy to find; they are big enough and close enough to move the star as they rotate around the star and this movement of the star can be detected as the spectrum of the star changes from slightly more red-shifted to slightly more blue-shifted.