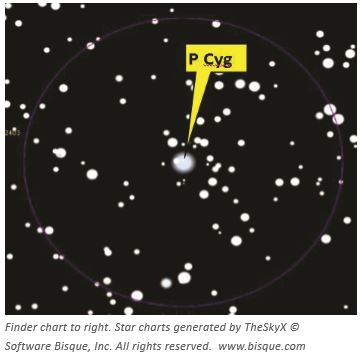 Object:  P Cyg
Class: Luminous Blue Variable
Constellation:  Cyg
Magnitude:  4.8
R.A.:    20 h, 17 m,  47 s
DEC:    38°  01’ 59”
Size/Spectral:  B1
Distance:  6500 +/- ly
Optics needed: A small telescope to pick this star out in a crowded field.
This star has a Bayer designation, ‘P’, but, as is often the case, the star is a variable but it retains its Bayer name. The naming convention for variable stars is different; the first variable in a constellation is typically called ‘R’. You can also find P Cyg using the following catalog names: SAO 069773 or HD 193237. Not much attention has historically been directed to a 5th magnitude star in a crowded field of stars, but in the year 1600 the star had the audacity to brighten to about 3rd magnitude, six times brighter than it was, and now is, at 5th magnitude. Over the time that this star was observed it brightened and dimmed a few more times. If you look at the data on the star today (AAVSO.org) you’ll find that it has dimmed and brightened (over a period of a few days) by a fraction of magnitude, hard to detect visually, but easy to detect photometrically.

P Cyg’s claim-to-fame is that it is usually considered to be the first ‘luminous blue variable’ found. Although P Cyg is one of the earliest stars identified as a luminous blue variable, those astronomers who study this class of stars call them S Doradus variables, after a prototype star in the Large Magellanic Cloud, only visible in the southern hemisphere. There is only a small population of these stars, and only 13 such stars are identified as LBVs in the General Catalog of Variable Stars (based on a GCVS search I did in mid July, 2016). Note that the star today is a B1 class (color) star, at the blue end of the spectrum. Blue stars are large and very hot (bluehot is hotter than red-hot).

There has been observed a small increase in the average brightness of the star in visual light (about .15 magnitude / century). This is not because the star is producing more energy overall, it is because it is producing more energy in the visible spectrum. Why? Very hot stars produce a lot of energy in the ultraviolet, and a bit of cooling associated with that star has shifted some of that UV ‘light’ to visible. This means that the star is getting redder as time goes on and it begins the long journey toward becoming a red giant star. Typically, stars like this normally stay on the main sequence of the HR diagram, but when they’re in outburst (i.e. brighter) the star moves horizontally on HR diagram, meaning that it becomes redder but retains the same luminosity. The instability strip on the HR diagram is represented by a wide vertical line to the right of the main sequence line -- which goes from lower right to upper left.

High mass (50 solar masses or so) stars like this one are characteristically live-fast-die-young stars that don’t spend a lot of time in mid-life. P Cyg is likely to be in late mid life, but a long way from becoming a supernova. When this happens it’ll be spectacular if there’s anyone on earth to see it. The star is well placed for observing right now; it transits in mid-August at about 11:30 p.m