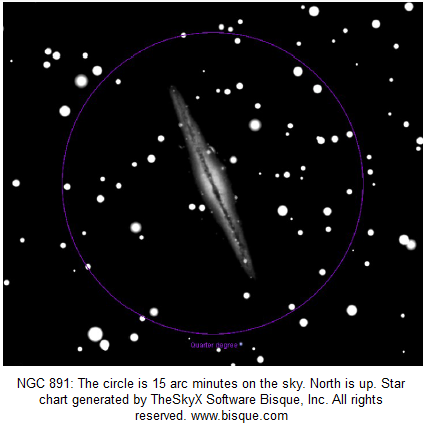 by Bill Pellerin, editor of the HAS GuideStar

In September of 1994 I spent a week at the Mount Wilson Observatory. One of the projects we did was to image a few objects in the sky and one of the objects was NGC 891. At the time I recall thinking that I had never seen a galaxy more beautiful than this one. You may think the same after you’ve seen it. It’s a beautiful edge-on galaxy with a dark dust lane splitting the disk into two halves.

You’ll find this galaxy just under 3.5 degrees east of Almach (Gamma Andromedae), a magnitude 2 star. The galaxy is identified on page 2 of the Pocket Sky Atlas.

Skytools lists this galaxy as, at best, ‘difficult’ in a 8” SCT, but you may find it easier than that. One thing is for certain — you’ll want to attempt this object under clear, dark skies and you’ll have to go to the country to log this object. While I can’t say for sure, I expect that I would be able to see this galaxy in my 4” refractor because I’ve seen galaxies that are dimmer than this one.

In any case, when you do, you’ll have logged an object that appears on Astronomical League observing lists including, at least, the Caldwell List and the Herschel 400 List. The Caldwell list was created by Sir Patrick Moore, but since there was already a ‘M’ (Messier) list, Sir Patrick used the letter C to designate his objects. His full name was Sir Patrick Caldwell-Moore.

The galaxy was discovered and cataloged by Caroline Herschel. Some references give credit to Caroline’s brother William.

If you want to read a good description of this object, look in Stephen O’Meara’s book The Caldwell Objects for C23, beginning on page 96.

I am not a deep-sky observer who goes out looking for the absolutely dimmest object possible, and I believe that this is the first galaxy I’ve included in my monthly ‘Shallow Sky’ list. Consider it something of a ‘challenge’ object but not so challenging that you should feel intimidated by it. You should find this object relatively easy under dark skies.

NGC 891 is about the same size and luminosity (intrinsic brightness) as our Milky Way galaxy. Observers somewhere in NGC 891 would not have a good view of the Milky Way because they’d be looking through the obscuring gas and dust. For them, it would be similar to us trying to find a deep sky galaxy behind the Sagittarius star cloud (just above the spout of the teapot).