Original article appears in GuideStar May, 2012. 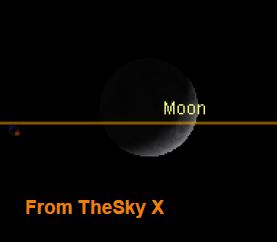 Object: The Moon
Class: An event, actually a non-event
Optics needed: You can see the moon rise and set without optical aid.

We tend to think about the moon rising and setting each day. Most of us who like to get out and observe under dark skies are aware of moon rise and set times. I was just checking the weather reports for the week and noticed that on this coming Thurday (April 24), there’s no moonset. How can that be?

The moon appears to move to the west in the sky because of the eastward rotation of the earth. This is true with the stars, planets, the sun and all celestial objects. 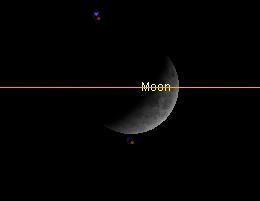 But the moon, of all the major objects in the sky is one that, on its own, moves a significant distance eastward in the sky each day. We see evidence of this because of the change in phases of the moon. This movement changes the relative position of the earth / moon / sun system.

And, in fact, on this Wednesday, the 25th of April the set time is 11:52 p.m. On Thursday, the 26th, there is no moon set. Finally, on Friday at 12:37 a.m. the moon sets. If you ask about the difference in set time due to the movement of the moon it’s 8 minutes + 37 minutes = 45 minutes, not far from our back-of-the-envelope calculation. Actual results depend on other things like the angle of the moonrise and moonset, whether the moon is at apogee or perigee, and probably some things that I haven’t thought about.

By the way… I’ve had to consult several resources to confirm these times. Some sources list moonset on May 26 at 23:58, which is not correct. The correct answer is that there is no moonset on May 26!