Original article appears in GuideStar May, 2017. 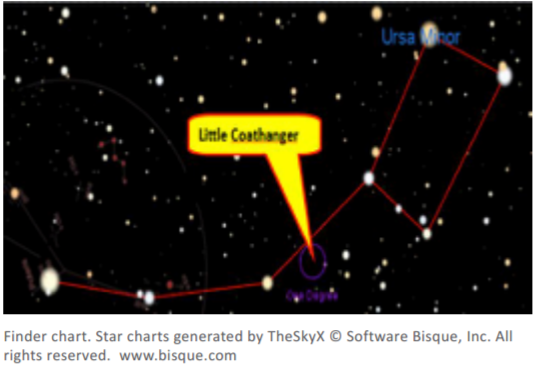 You have probably heard of, and seen, the Coathanger asterism (Collinder 399) in Vulpecula. I wrote a ‘Shallow Sky’ article about this object in the June 2007 GuideStar. This time, we’re looking for the Mini-Coathanger, another asterism for which the arrangement of the stars looks like a coat hanger. The first time I looked for the original Coathanger I expected a triangle with a hook at the top of the triangle, but the asterism looks like a straight line of stars with a hook near the middle.

Likewise, the Mini-Coathanger looks like a line of stars with a hook near the middle. You can easily star hop to this asterism as follows:

I don’t see a color difference among these stars, do you?

WHY IS THIS INTERESTING?

The Mini-Coathanger was on the 2003 Telescope Observing List of the Texas Star Party, credit to John Wagoner and to Richard Brown for creating the list. The list is still available from the TSP web site (www.texasstarparty.org) if you are inclined to want to do it. The list was titled “The Great

Celestial A.R.C.” (Asterisms, Radio sources, & Clusters). Since the Texas Star Party is coming up in May, I thought it was a good time to pick an object from one of the TSP observing lists for my ‘Shallow Sky’ object of the month.

I like asterisms because they’re easy to see, easy to identify, and something of a surprise. The surprise is how closely, or not, the asterism matches the ‘thing’ that it’s supposed to represent.

The Astronomical League has an observing program for asterisms, (Troy Stratton), and the pin for the program shows the stars of the original Coathanger asterism. As humans we tend to look for patterns in objects and in collections of stars. We call larger collections of stars that form a pattern a constellation even if it takes a bit of imagination to see the figure that is supposedly represented by the constellation. Different and disconnected cultures, not surprisingly, came up with different figures for different collections of stars. Part of the motivation for naming these groupings of stars was so they could be recognized again in the future. Early observers could determine the season of the year by noticing which constellation was where in the sky. This was, of course, important for knowing when to plant and when to harvest crops.

Remember the ‘face on Mars’? A combination of light and shadow on Mars made a rock formation look like a face (which prompted a lot of discussions about Martians having created the face-like image on purpose). Wikipedia even provides a name for this tendency to associate random patterns with patterns we already know – Apophenia.

So, this is an easy object to find and enjoy this month. For more asterisms, check out the Astronomical League Asterism program (www.astroleague.org).