Shallow Sky Object of the Month: The Great Square of Pegasus

Shallow Sky Object of the Month: Great Square of Pegasus 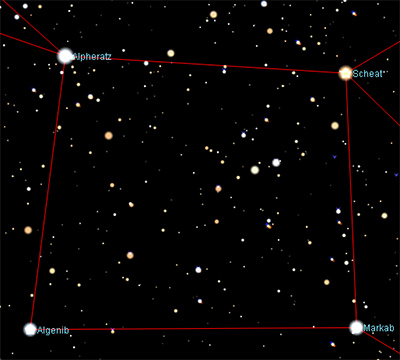 This is a large area of the sky, taking up approximately 184 square degrees (my estimate) and many astronomers say that there’s not much of interest within that square.

The knock on the Great Square of Pegasus is that it is devoid of stars. It’s not, of course, but there aren’t a surplus of bright stars within the square. The brightest star I could find shines at magnitude 4.4, not so bright.

Maybe so, but just outside the western edge of the square is 51 Peg, famous for being the first star other than our sun to have planets discovered. In the October. 2009 GuideStar, 51 Peg was the Shallow Sky Object of the Month.

Let’s look at the four stars that make up the square in detail.

Scheat — This star, being the westernmost, leads the great square through the sky. It’s the second brightest star in the square and it’s a M (color) star, which means it’s reddish. In fact, much of the radiation of this star is in the infrared and is not visible to you. This star is a red giant and is a variable star — it varies by about .5 magnitude. If you look at the light curve for this star at the American Association of Variable Star Observers web site, the period of variation is hard to pick out. See if you can find the period of variability of the star.

Markab — is only slightly dimmer than Scheat, when Scheat is at its brightest, but it is a significantly different color. This is a B class star, which means it is much more blue/white. If you compare this star with Scheat, the color contrast will be obvious. Like many stars in the sky the name of this star is Arabic and it may mean the ‘saddle’ or ‘shoulder’ depending on the heritage of the name. This is also a highly evolved star, off the main sequence and much larger than our sun.

Algenib — Like many of the stars in the great square, this star is a few hundred (almost 400) light years away. It’s another evolved B star, perhaps as much as 10 times the mass of the Sun and slightly variable (about .1 magnitude). This star is low enough mass that its final phase may be as a white dwarf (the final phase of our Sun). It’s a close call, though, and it may yet be massive enough to end life as a supernova.

Alpheratz — The brightest star in the great square and officially assigned to the Andromeda constellation, there wouldn’t be a square without this star. As early as 1904 it was determined that Alpheratz is a spectroscopic binary (a double star that can only be detected by red/blue shifts as the main star is tugged by its companion). The period of the orbit of the two stars is reported to be 96.7 days. The star is unusual in that it had some heavy metals in its spectra — including mercury.

Finding the Great Square is your gateway toward finding the constellation Andromeda (off the northeast corner of the square), and the Andromeda Galaxy (M31).