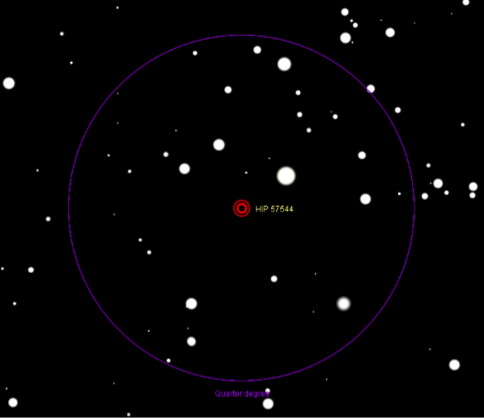 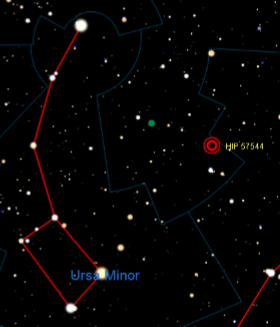 Depending on how dark your sky is and how large your telescope is, this may be a difficult object for you to find.

You’ll find it in the northern sky, just shy of 12 degrees south of Polaris. Note the finder chart at right. It includes a 1/4 degree circle, so it’s a fairly small field of view.

The software I use, TheSky X, does not identify the star by the name Gliese 445, but does show the location of the star by its other name HIP57544 (although, curiously, it does not show a star at that location). There is a photo of the region on this web site: http://www.nasa.gov/mission_pages/voyager/multimedia/pia17461.html#.Uokl..., and the location shown there is the same as is shown in the upper, detailed chart.

So, why would we want to take a look at this otherwise unremarkable star? It’s because Voyager 1, the spacecraft that left our planet on September 5, 1977 and which flew by Saturn and Jupiter is now on a path toward this star. Right now, the spacecraft is about 127 AU from the Earth and it’s the farthest any human-made object has ever gone. In only 40,000 years, Voyager 1 will pass 1.6 ly from the star. If we call a ‘generation’ 40 years (and there’s some disagreement about what time-span constitutes a generation), it will arrive at the star in 1000 generations.

Voyager 1, you may recall, is the spacecraft that carries a disk, more like a phonograph record than a CD, with sounds and sights from our home planet. This disk was put together by a team led by Carl Sagan.

Gliese 445 is classified as a red dwarf star, and it’s only about 1/3 the mass of our Sun. As a low mass star it will stay on the main sequence (in mid life) for a very long time.