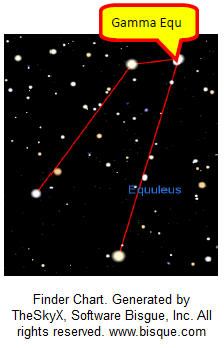 by Bill Pellerin, HAS president & editor of the GuideStar


Why this object is interesting:

Gamma Equ is a double star, but don’t be distracted by that idea.

There’s a nearby star that looks like it could be a double with gamma, but it’s what is called an ‘optical double’ — nearby, but not gravitationally associated. The real double is a 9.05 magnitude star about 1.25” away. Good luck seeing this one. (This double is a test star in Sissy Haas’ study of the visibility of double stars. See the July, 2013 GuideStar for more information on this study.)

The star has interesting (peculiar) chemical abundances. Recall that a main sequence, low mass star consists of a large quantity of hydrogen fusing into a helium core. Stars like our sun are like this, but with a few heavier elements which became part of the Sun because those elements were in the cloud which collapsed to create it.

Strontium, europium, and iron are about 50 times more abundant in this star than in our sun. Other elements such as calcium, chromium, barium, silicon are more abundant for a star of this mass and temperature. The star has a very strong magnetic field and the abnormal abundances of heavy elements may be associated with that characteristic.

There are other oddities about this star as well, the collection of which cause it to be classed as an Ap star, with the ‘p’ meaning ‘peculiar’. (In the beginning of this article I say it’s a F0 star, but some call it an A9 star. This gives rise to the Ap designation.)

So, if Gamma Equ is saddled (pun intended) with being labeled peculiar it also is often called a roAp star. Fine. The ‘ro’ add-on indicates that it has been discovered to be rapidly oscillating. The oscillations make the star slightly variable over 12 minute intervals. The variability is only about a thousandth of a magnitude. This magnitude variability is associated with the strong magnetic field which causes pulsations in the star. The magnetic field reduces the amount of convection (the way that heat is carried from the core of the star to the surface) at the poles of the star. When less heat is carried to a part of the star it naturally gets dimmer.

It is a common practice among professional astronomers to estimate the size of a star based on its luminosity (intrinsic power output) and its temperature (color). This information places the star on the H-R diagram and provides the astronomer with a good estimate of its size because it can be compared with other stars in similar locations on the diagram.

Another easy-to-find roAp star at this time of the year is beta CrB (Corona Borealis).

Equuleus, the constellation is not one I normally think of as containing interesting objects. At least one book I have says that there’s ’nothing interesting’ there. I disagree. If you examine any object in the sky you’re likely to discover that there’s much more to know than meets the eye. In addition to seeing this star, check out the location of the constellation that contains it. I can’t say that I have made an effort to see this constellation in the past. Maybe I’ve never seen it. Now, I know it’s worth a look.