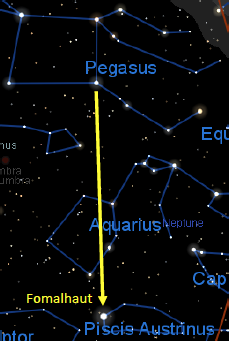 I remember one night I was looking for alignment stars for my telescope’s computer. One of the suggested stars was Fomalhaut, and I was forced to admit that I had no idea where this star is on the sky. So, let’s start by seeing if we can find the star. It’s a bit lonely in the southern sky but at our latitude it rises to about 30 degrees above the horizon. It’s visible north of here, but it’s a southern star and being in the south is an advantage.

If you can see the Great Square of Pegasus, you can find Fomalhaut. Find the two stars on the western side of the Square, draw a line through those stars and continue south through Aquarius about 45 degrees and you’ll find it. If you’re looking for nearby stars for guidance you won’t find any. Fomalhaut exists as the single bright light in a field of dim stars.

The star is a A3 on the spectrum, meaning blue or blue-white. Because it’s low on the sky it may look a bit reddish (for the same reason the Moon looks red when it’s near the horizon — the atmosphere disperses the blue light making the object appear to be redder color than it is). It’s the 18th brightest star in the sky, not including the Sun and easily qualifies as a member of the first magnitude club.

This star rises late in August, but will rise earlier and earlier as time goes on.

The correct way to say the name of the star is to retain the final ‘T’ sound in the name, sort of like foam-a-lot. The name is from the Arabic for the mouth of the fish.

There’s a large circumstellar disk around Fomalhaut, but are there planets? Fomalhaut is a fairly young, 200 million-year-old, star, and there hasn’t been a lot of time for those planets to develop life. The Sun, but contrast is about 5 billion years old, and we know for certain that life developed in the vicinity of the Sun. There are images of the planet from 2005, now known as Fomalhaut B with a 2000 year orbital period in a highly elliptical orbit. The circumstellar disk has a hole near the center (i.e. near the star), and this may indicate that relatively close-in planets that have cleared out the debris from the disk. This disk could be the equivalent of our Kuiper Belt. The circumstellar disk around Fomalhaut is not near the star residing at about 140 AU from the star. Hubble Telescope images show this disk clearly.