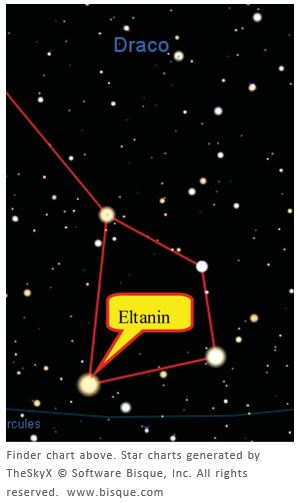 Thuban has the distinction of having been the ‘Polaris’ (pole star) around 3942 BC, so it’s likely that the designation of it as the Alpha star is because of its position, not its brightness.

The star lies about 14.5 degrees north and a little west (333 degree position angle) of the star Vega, which shines at 0.0 magnitude and is easy to find in the summer sky. Find Eltanin by drawing a line from Altair to Vega and on to Eltanin.

At 1.7 solar masses, this star is a low mass star. Although the dividing line between low and high mass stars is not easily pinned down, there is general agreement that stars above 8 solar masses deserve to be recognized as high mass stars.

This is an ‘evolved’ star, as the astronomers who study stellar evolution would say. When they say such a thing they mean that the star has moved off the main sequence (it is past mid-life), to one of the giant phases to become a red giant or an AGB (Asymptotic Giant Branch) star. Its size has swelled to about 50 times the size of our sun and has a temperature at its photosphere of about 4000 K (Kelvin). (Our Sun has a temperature at the photosphere of about 6000 K.)

It’s color, K, gives away some secrets. In the scale of OBAFGKM, this star is near the red end of the spectrum and its color should be easy to see when compared to nearby stars. (Photographs show this color distinctly.)

The fate of this star is the same as the fate of our Sun — to become a giant star (twice—once on the red giant branch and once on the Asymptotic Giant Branch) before throwing off its outer layers to become a planetary nebula.

This star along with its neighbor, Rastaban, form the eyes of Draco the dragon.

What’s the brightest star in the sky? Trick question — the Sun is the brightest star. The next brightest star is Sirius, the dog star in Canis Major. Because Eltanin is moving toward us, in only 1.5 million years, it will outshine Sirius. At that time, it’ll be about half the distance from us that it is now. This assumes that the absolute magnitudes of the two stars doesn’t change in that period.