Shallow Sky Object of the Month: The Ecliptic

Because the Sun is low in the sky this time of the year, as it always is in winter, the ecliptic is high in the sky at night. The Sun will be high in the sky in the summer and will lie somewhere on the ecliptic line. On the first day of summer (the summer solstice), the Sun will be near the Taurus/Gemini border and 3.75 degrees from Eta Gemini, The first moment of summer will be at 6:09 p.m. on June 20 (2012), and this is (or is very near) the day of longest sunlight. At the end of summer / beginning of fall (September 22, 9:49 a.m. local time) the Sun will be in Virgo, very near the star Zavijava (beta Virginis).

In mid March, you can find these locations in the sky and imagine that the Earth has moved around the Sun enough that the Sun is at the foot of Gemini, the beginning of summer, or near Zavijava, the end of summer.

In fact it’s relatively easy to trace the path of the ecliptic right now. In the eastern sky Spica is about 2 degrees south of the Ecliptic and Saturn is about 2.75 degrees north of the Ecliptic. Start here and continue your line in space west to Zavijava/Beta Vir (you may have to look this one up to find it). When the Sun is here, summer will have ended and fall will begin. Then continue to Regulus in Leo (about .5 degree north of the Ecliptic). From here go to the central star of Cancer (Delta Cancri), then to Delta Geminorum. Continue on to Eta Geminorum at the end of the foot of the twin that starts at Castor.

From here, the trail goes a bit cold. The Ecliptic is 4 degrees south of the Pleaides. Finally, in the west, you will see Jupiter and Venus straddling the Ecliptic and you will be at the end of the trail. Note that while the planets may be near the Ecliptic, they are not always on the Ecliptic. This explains why we don’t have a transit of Mercury and Venus on a regular basis. The Ecliptic is, by definition the path of the Sun through the sky, but the other planets haven’t been told that they need to get in line. 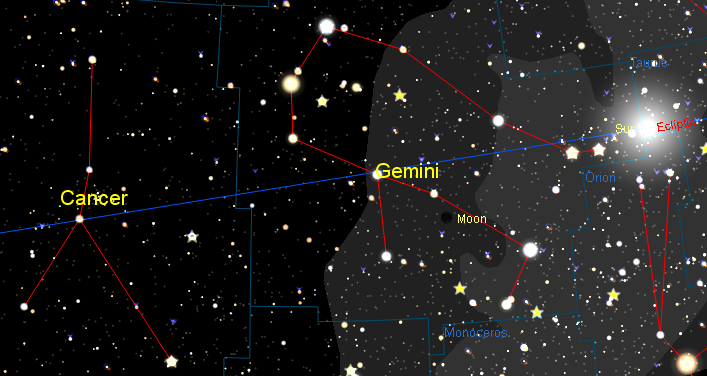