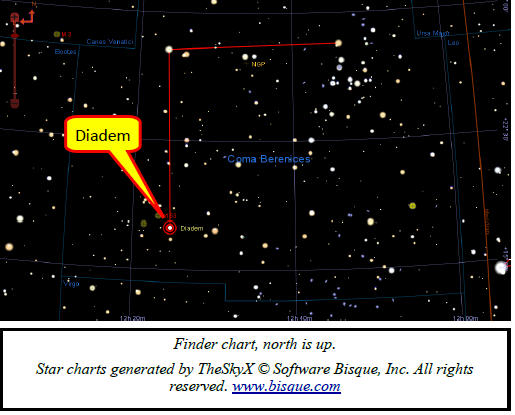 Update: The AAVSO has posted a notice on its web site that the eclipse will not happen at the anticipated date and time.

Why this object is interesting

(This information is based on an article in the January, 2015 Sky & Telescope magazine, page 50, and other research.)

The name of this star means crown or other ornament representing royalty. In this case the crown is in the constellation Coma Berenices (Berenice’s hair) and this star represents the crown on the head of queen Berenice.

All well and good, but the thing that makes this star interesting to observers is that it is a binary star consisting of two mag 5 stars very near each other and with an orbital period of about 26 years. Remember that orbiting objects orbit around the center of mass of the system, so, in this case it’s more like a dance in the sky than it’s like a low mass object orbiting a high mass object.

The fascinating thing about this binary is that the plane of the orbit of the stars is in our line of sight. This means that we should see an occultation of one of the stars by the other star on a regular basis. What then? We could see the magnitude of the system drop by .7 magnitude or so during the eclipse.

The AAVSO is asking amateurs with photometric measurement capability (even if that capability is limited to visual observing) to begin observing the star on January 22 and to continue monitoring the star through January 28. (V or R band photometry is recommended.) The duration of the eclipse is unknown, but is expected to be between 28 and 45 hours.

More information, including recommended comparison stars and a link to the AAVSO charting capability is at : AAVSO.org/observing-campaign-alf-com

The star is in the AAVSO database as ‘ALF COM’.

If you have not done photometric brightness measurements of variable stars, there is a lot of information on the AAVSO web site to help you get started. It is important that observers take ‘baseline’ images prior to the event to get data on the non-eclipsed magnitude of the star.