Shallow Sky Object of the Month: The Clear Daytime Sky 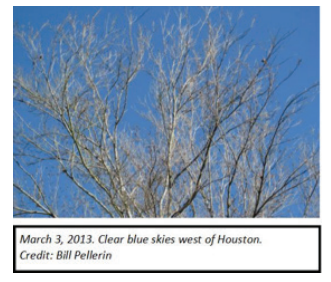 Originally Published in the November 2016 Guidestar

The Sun is a G2 star, with a temperature at the photosphere (what  we think of as the ‘surface’ of the Sun) of 5800 Kelvin. It’s accurate  (enough) to say that the light that is radiated from the Sun is white  light and that the light includes all the colors you see – all the colors of the rainbow (literally). So, what happens between the time the  light leaves the photosphere of the Sun and the time it reaches us? The most significant event in that journey is the last 10 or 20 miles of its trip, in the atmosphere of planet earth.

Here is a simplified way to think about what happens: Consider a white light beam leaving the Sun. This light beam includes all colors (wavelengths) of light, but when it slams into the  atmosphere we know that the shorter wavelength blue light is more likely to get scattered. That is, the blue light hits an air molecule and, instead of coming straight down to your eyes it goes, let’s say,  left or right. The blue light continues its bumper pool path by hitting another molecule which redirects light to your eyes. In reality, it may take several bounces for the light to be sent to your eyes, and some of the blue light will be reflected up and away from the planet, which makes our planet look like a blue marble.

Sunrises and sunsets are red for the same reason that clear skies are blue. When the Sun is near the horizon, there’s  much more atmosphere between the Sun and the observer. Since atmosphere scatters the blue light, very little of the light from the Sun makes it to your eyes at sunrise or sunset. So, the sky looks red.

One more thing. You’ve probably noticed that when children draw the Sun in the sky it’s often a yellow circle. It’s not yellow, though, it’s closer to white. Since even at noon, the blue light from the Sun  is scattered and doesn’t follow a direct path to the earth, the light  that’s left looks a bit more yellow.