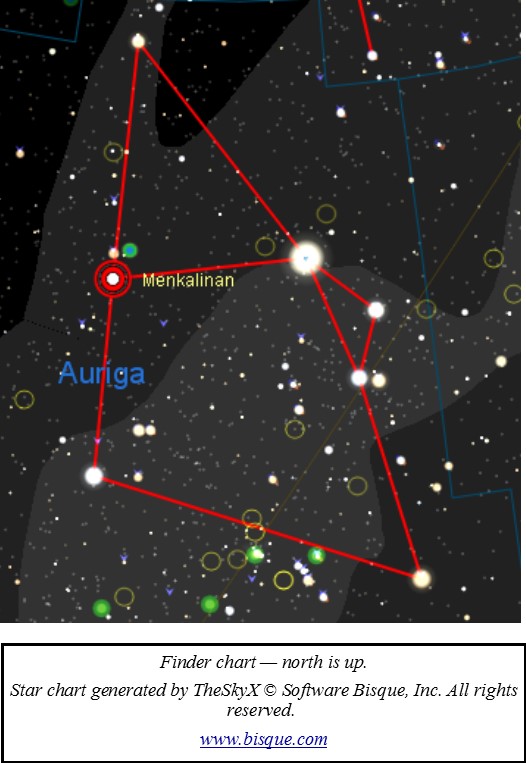 Originally published in the January 2016 Guidestar

The schemes for naming stars can be confusing. The Bayer designation consists of the letters of the Greek alphabet (normally in order of brightness) and the genitive (possessive) name of the constellation. The designation β Aur is typical of a Bayer designation.

Variable stars typically have a letter R, S, T, U and so on, and then the genitive name of the constellation, such as R Aur. R Aur turns out to be an unrelated Mira variable that changes from about 7th magnitude to about 14th magnitude.

That said,  β Aur is an eclipsing variable that only drops about .1 magnitude (at the limit of being able to detect visually) every 3.96 days. Given the color of the two stars that comprise this double you’d be correct to assume that these are large stars, and given the period of the orbit you know that they’re very close to each other.

What else can you know from these simple observations? Well, it’s clear that we earthlings are not on a direct line to the orbital plane of these two stars. If we were, the dip in magnitude during an eclipse would be larger than we observe it to be. So, we’re only seeing a partial eclipse of the two stars.

The most famous eclipsing variable star is Algol, the demon star, described in the November, 2006 GuideStar. Algol is so well known that Sky & Telescope magazine publishes a list of the predicted minima of Algol every month.

If you investigate variable stars you’ll find they fall into many categories but the first fork in the road is whether the star is an eclipsing binary or an intrinsically variable (pulsating, usually) star. Eclipsing binary stars represent the first fork in the classification of variables and the easiest to understand. Intrinsically variable stars fall into many categories, identified (usually) by the ‘prototype’ star (one that well represents that category).

That’s not the whole story. There’s a 14th magnitude companion to the pair that lies about 13 arc seconds away. It’d take a larger telescope and dark skies to see this one, though it may be hidden by the brightness of the two primary stars.