False Twilight: The Zodiacal Light – Is it a Reflection of Mars? 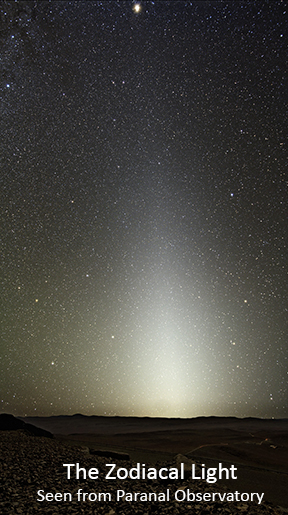 This phenomenon is attributed to the scattering of light by tiny dust particles in the plane of the solar system. It usually appears as a diffuse triangular region, broadest at the horizon and narrowing towards the zenith. Zodiacal light is dim enough that light pollution or the Moon’s glare will mask its faint glow. In clear, transparent skies with no light pollution, the Zodiacal light soars across the entire sky, with a slight brightening at the anti-solar point, where backscattered light causes a brightening called the gegenschein. In less perfect conditions, Zodiacal light is a brightening of the western sky after sunset or the morning sky before dawn, when it is called the “false dawn”. Although Zodiacal light can be seen on most dark nights, it is most prominent after sunset in the spring and before sunrise in the fall. 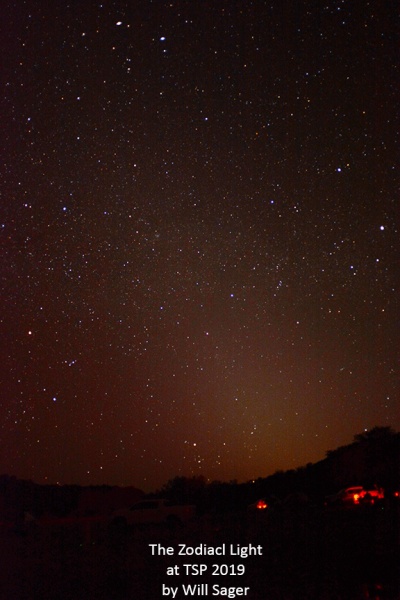 Although the cause of Zodiacal light has been known for some time, the source and distribution of the interstellar dust is unclear. A common explanation for the dust source is comets and asteroid collisions. Recently, scientists have suggested that the dust comes from Mars. In an article published in Journal of Geophysical Research: Planets, authors J. L. Jorgensen (National Space Institute, Denmark) and others report that the Juno spacecraft fortuitously spotted this dust. As Juno dove back into the inner solar system from the asteroid belt to slingshot around the Earth, its tracking cameras recorded dust between Earth’s orbit to just beyond Mars. The inner edge of the dust cloud is just outside the Earth’s orbit as a result of Earth’s gravity. The outer edge is between Mars and Jupiter, formed by the latter’s gravity. Modeling the effect of Jupiter on dust particles gave a good fit to the observed location and brightness, so the authors hypothesize that the dust comes from the red planet, which is known for its global dust storms. Exactly how the dust leaves the Mars gravity well is still unclear.

This is a good time of year to see Zodiacal at the HAS dark site in the evening. While you are waiting for the sky to darken so you can chase some faint fuzzies, at the point where you start to get annoyed at how long it is taking – you may well be seeing the Zodiacal light!