Shallow Sky Object of the Month: AM Her—An X-Ray Star 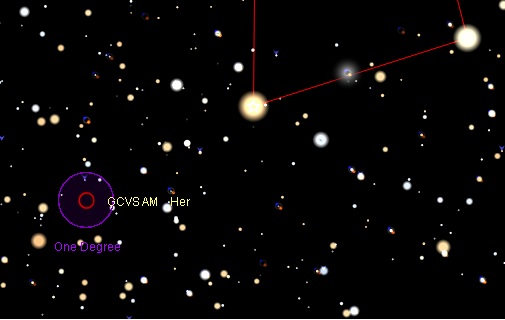 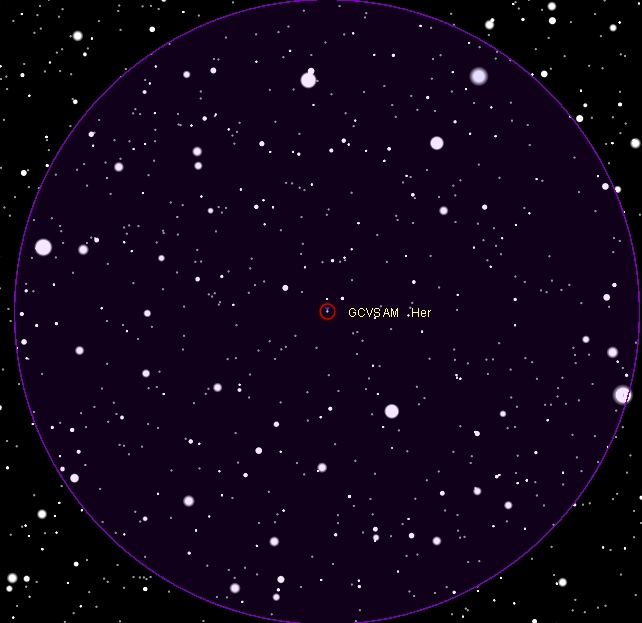 The following is from the July, 1978 issue of the newsletter of the Houston Astronomical Society provided to me by Steve and Amelia Goldberg. References to various charts in the text were changed here.

The July observing project, like that in June, is a faint but interesting object. The star AM Herculis has been known to be a variable star since 1923. In the past few years however, it has been discovered that AM her is also the x-ray source 3U 1809+50. Recent studies of this interesting object indicate that it is a binary star. The members of the pair include a cool star of about half the diameter and mas of the sun, and a white dwarf with a mass approximately equal to that of the sun. The visual brightness of AM Her varies from ~ 12m when the white dwarf is not eclipsed by the cool star, to fainter than 14m. Because of the absence of the x-rays during the eclipse, these became known as the “on’ condition and the “off” condition. The period of rotation is 03 hours, 05 minutes and 38 seconds, so the “on condition is visible during some portion of every night for observation.

AM Her is well placed for observation during the summer months. As shown on the (included) finder charts… it lies near the boarder between Hercules, Lyra, and Draco, and can be located near the bright star γ Draconis. You should be able to identify the 5.1m star to the east of γ Dra easily in your finder. Then switch to your lowest powered eyepiece, and locate the 9.5m star in your telescope field. This star is also shown in (the included chart). After you are sure you have the correct field identified, increase the magnification on your scope until you can identify AM Her.

Observers with a 4 1/2” telescope might be able to see AM Her when it is in the “on” condition on a good dark night. With any larger telescope, it should be possible to see AM Her under any reasonable seeing conditions, and with any telescope larger than 8”, it should be possible to follow AM Her completely through an eclipse. Use the comparison stars (on AAVSO charts) to plot a light curve for an eclipse if possible. It will be considerably different than the normal type of EB variable.

If you are interested in more details on this interesting star, it was described in “The Story of AM Herculis” by William Liller, Sky and Telescope, May 1977.