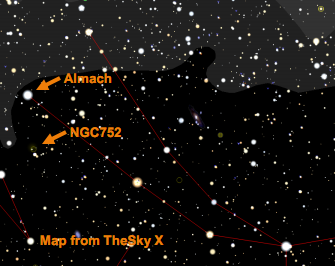 Tonight, we’re going to look at Almach, also known as Gamma Andromedae or Gamma And. It’s a double star, and with summer gone and autumn upon us (with cooler and longer nights), it’s time to look away from Albireo and look toward a new double star that is equally interesting.

Gamma And is a double star separated by almost 10 arc-seconds so it is easy to separate in just about any telescope. Beyond that, there is a significant color contrast between the components of this double star. The stars of Albireo are K3 and B0, so the K3 (red) star is the same color in each pair the accompanying star in Gamma And is a B9 color, more white than the B0 star in Albireo.

There’s more. The dimmer, B star in Gamma And is also a double, but don’t expect to see it in your telescope. The separation is a small fraction of an arc-second, and can’t be resolved with the best of amateur telescopes.

If you still have time on your hands you can find 56 And, which is a double star separated by 200” (very wide). Probably best seen in binoculars. This double star pair lies just to the southwest of NGC 752.

Another double in the neighborhood is 59 And, each star is a bit dimmer than 6th magnitude and the separation is about 17”. You won’t see any color contrast in this pair, though.