Shallow Sky Object of the Month: Aldebaran – The Eye of the Bull 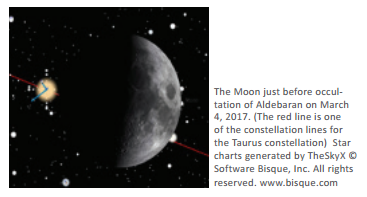 When you see the constellation Taurus and the nearby and popular constellation of Orion you know it’s winter. Well winter officially began at 4:44 a.m. (Central time) on December 21. Those of us who live in the southern United States are now having days of cool temperatures and days of warm temperatures while the weather figures out what season it wants to be.

If it’s too cold for you to get outside and set up your telescope for an extended observing session there are still plenty of objects to admire with a quick visit to the back yard. The object this month is a very bright star, obvious to the unaided eye in the constellation Taurus. Aldebaran stands out for both its brightness and its color, a bright orange / red that’s not duplicated by any nearby stars. Not too far away, though, is Betelgeuse, which is a redder, M class star.

So, what are we looking at here? Aldebaran is slightly variable, from .75 magnitude to .95 magnitude, but this change in magnitude is not easily visible to anyone making visual observations. A photometric observer could detect this change, but a quick check of the AAVSO (American Association of Variable Star Observers) finds no data for this star submitted. Aldebaran is close enough to the ecliptic that there are times when the Moon occults (moves in front of) the star. It would also be true that the Sun can occult the star, but it would be impossible to observe this occultation for obvious reasons.

There’s an occultation of Aldebaran on March 4, 2017 beginning at 7:53:22.9 Central time and ending on March 5, at 00:04:50.5 Central time. For this occultation, the Moon will be at first quarter. This is a long duration occultation because the star goes almost directly behind the moon.

Usually, when a star is occulted by the Moon it simply winks out. It’s there one instant and in the next instant it’s not there. Aldebaran is .02 arc-seconds on the sky and has been reported by observers to not wink out in the same way that other stars do, perhaps taking as much as .02 seconds to disappear. Can you see this?

In the finder chart associated with this article, note that the ecliptic (blue line) is north of Aldebaran. As we all know, the Moon’s path through the sky is close to, but not on the ecliptic.

What else can we see while we’re waiting for the occultation? When we observe Aldebaran with binoculars or a wide field telescope we’re looking into the Hyades cluster, considered by some to be the ‘sister’ cluster to the nearby Pleiades cluster. Aldebaran is not a member of the Hyades cluster, however. The cluster is about twice as far from us as is Aldebaran. It’s very pretty to see this cluster on a dark night.

Our understanding of stellar evolution tells us that Aldebaran has evolved and is no longer on the main sequence, the mid-life of stars. This means that hydrogen burning is no longer taking place at the core of the star, and helium is now powering the star. A hydrogen shell is still burning at an outer layer of the star, however. Whether Aldebaran is the host star for a planet, or a planetary system, is still under discussion. Some wobble has been detected in the star, and this wobble could be associated with the tug of a planet, but it is also believed that that some of this wobble may be intrinsic to the star going through the transition from a main sequence star to a red giant.