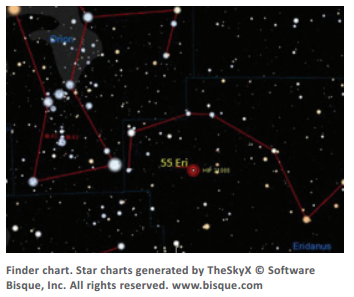 If you’re a reader of Astronomy magazine you may have run across Glenn Chaple’s article in the March, 2017 issue called “Double star marathon redux”. The idea is to create a double star marathon list to complement the Messier list. Most of us know that in March it’s possible to see all the Messier objects in a single night. If a Messier marathon isn’t enough for you, try the double-star marathon. (Information on how to get the list is in the article, or just email Glenn at [email protected]. com.)

There’s not much that can compete with double stars for observing opportunities.

The star pair that I’ve chosen from Glenn’s list is a good one in that it is relatively bright, the stars are within .1 magnitude of each other, and the separation is large enough that even modest telescopes will split it easily.

Like most stars, this one exists in several catalogs, Flamsteed (55 Eri), Smithsonian Astronomical Observatory (SAO 131443, and the Struve catalog of double stars (STF590). My computer based sky map (TheSky X) finds the star for any of these designations, but requires the text ‘STRUVE 590’ to find it using the STF catalog.

I remember a night, long ago, when I was at the HAS observing site with my 15” dob. I had completed my list of 6 objects for that night, so I found an article by Sissy Haas (Sky and Telescope) on double stars and thought I’d give these a try. I did and was delighted to see a wide array of double stars on that night. There were some pairs that were close enough and so similar in magnitude that I couldn’t help but think of these as headlights on a dark road, or the eyes of an animal lurking in the night.

The Astronomical League has a double star award, and I encourage you to work on that program. If you observe 55 Eri, you’ll have completed one of the stars on the list. (You’re obliged to draw the double star as part of the program.)

The combined color of the two stars is F4, which puts it in the middle of the color spectrum. Only about 1/3 of the stars in the sky are F stars, and, recalling that the original list of star colors was in order of the strength of the hydrogen line in the star’s spectra, we should expect that this star would have a rather weak hydrogen line. In fact, F stars have strong calcium absorption lines. These absorption lines occur in the outer atmospheres of stars and give astronomers clues about the history of the star.

This star is available in March early in the evening with a local transit time of about 20:15. If you have electronic setting circles or a go-to telescopes, it’ll be easy to find.