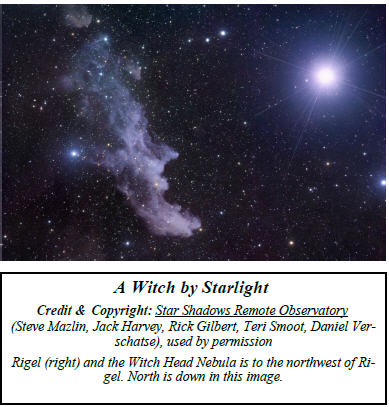 It’s easy to find, so easy that I considered leaving out the finder chart, and it’s well placed for observers at this time of the year. Rigel transits at 19:46 and sets at 01:33 on the 18th of February, the day of the new moon.

Rigel is a blue supergiant star that has, due to advancing age, drifted away from the main sequence on the H-R diagram (the midlife of stars) and has completed its converting of core hydrogen to helium (the nuclear process that powers the star). When this happens, we’re left with a shell of hydrogen at the outer layer of the star. Rigel will end its life as a Type II Supernova.

This stage of life for the star is characterized by a very high luminosity, a very high mass loss, and some instability. The star, like many stars that have moved off the main sequence is variable, but only within a small range (.05 to .18 magnitude).

Stars are talked about in terms of how they compare to the Sun, and this one is 21 solar masses, 117,000 times the solar luminosity and the most luminous star close to planet Earth. (Sirius is brighter to us because it is so much closer, only about 8.6 ly instead of Rigel’s distance of 860 ly.) If Rigel were as close to us as Sirius, the brightest star in the sky at –1.5 magnitude, it would shine at –11 magnitude. The full Moon is somewhat brighter than that at magnitude –12.74.

There is a low population of these stars in the sky, but since they are so bright they represent a disproportionate share of the stars that are visible to the unaided eye.

The light from Rigel is believed to be what illuminates the ‘Witch Head’ nebula (IC2118) (see photo).

Rigel B, the companion star to Rigel A is separated from the main star by 9.4” and shines at mag 6.8. It’s south of the primary star, Rigel A. This would be an observing challenge due the brightness of Rigel A.