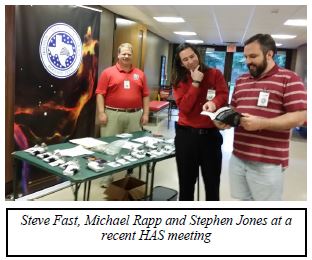 Getting around Greater Houston has never been easy. Increasingly I find myself wishing I could cut my commute time and travel only to the fun stuff,  activities like hearing a talk on astronomy, helping with a school star party, or getting to the dark site, scope in tow. That's why I'm particularly excited that a few of the directors are taking a look at the possibility of meeting remotely, primarily to conduct board business that can’t wait for the next face-to-face meeting. Being able to meet online is mature technology to be sure, think WebEx or Skype. Being able to do so at minimal cost for a good-sized nonprofit is an opportunity begging to be explored.

I've asked Mike Edstrom, who presented the idea, to chair the study team to find out if it could work for us. Bill Pellerin and Scott Mitchell will provide their perspectives and round out the group. We'll have to see what they come up with first, but I’m hoping more of us HAS members will want to join a committee as a result of their findings. With the possibility of committee meetings held online, we can reserve drive time for the fun stuff—getting to a star party, an HAS presentation, or an outreach event.
So what do you want to be when you grow up?

Some of the leadership team have begun to ask themselves that very question about HAS. We are board nerds so whenever we have an existential question, we look to the bylaws. To wit:

Article III: The corporation is formed for educational and scientific purposes for individuals and groups, of all races, creeds and ethnic backgrounds without regard to sex, for the primary purposes of (1) developing and implementing programs designed to foster awareness in individuals and in the community with regard to astronomical developments and achievements as well as promoting the science of astronomy, and (2) making available to individuals and the community educational resources concerning astronomy.

The message to the community is pretty straightforward. HAS was formed to spread the word about astronomy and provide the resources to learn about it firsthand. It’s astronomy for all. We can credit the founders of the society with the foresight to make our purpose at once so particular while also so encompassing.

Even so, a lot has changed in both astronomy and in society since HAS was incorporated in 1978. We are different individuals and our concept of community has broadened. Article III of the bylaws allows for that. It is up to us, however, to create the vision needed to serve the individuals, groups, and communities we are growing up to be.

It's months like these past ones that remind us why we add "armchair astronomy" to our list of interests. If you're into planetary and space science, though, the times have been anything but disappointing. Rosetta’s Philae lander woke up, twice as of this writing. Stunning images of the bright spots on heavily cratered Ceres arrive regularly from NASA’s Dawn probe. And then there’s the New Horizons Pluto Encounter. On its first mission to Pluto and the Kuiper Belt, NASA’s New Horizons space probe will make its closest approach to Pluto on July 14. It’s going to be a media riot and a lot of fun. I know I’ll be watching for Bill Kowalczyk’s space news summaries.