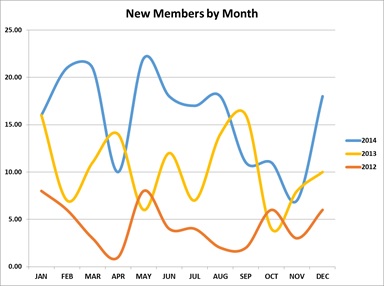 You may have wondered how I’ve been able to quote all the membership numbers each month to give you a clearer idea of who we are, or at least how many. A president has access, but it’s not total, and as for me, I rely on the knowledge and commitment of the committee chairs. So I get my numbers from Steve Fast, our membership chair and keeper of the member database.

For Steve, members are more than numbers, more than entries in a database. While he’s careful to keep your membership data accurate and your private information protected, he’s also the one who greets new members to the club with his informative welcome e-mail and gives us all a heads up when it’s time to renew (you did renew, didn’t you?). He’s also the friendly face at the membership table each meeting, the stellar star-hopper at the dark site ready to lend a hand, and past Field Trip & Observing chair who inspired successor Stephen Jones to take up the baton. I think of Steve as a friendly HAS ambassador. Many others know him as a helpful friend.

If you’ve been to the dark site a few times, you know Ed Fraini. Ed was one of the group who gave me my observatory training and helped me find Albireo in the 12.5” f/5 telescope. Sure I was intimidated, maybe fear is a better word. But what a rush when I found that colorful double star system myself. I’d long wondered who those guys were coming in and out of the observatory. Ed was one of them. Still is.

Some months ago I asked Ed to be part of the Long Range Planning committee to test a concept: Can we learn something about who we are, where we are, and where we’re going just by looking at the numbers? Steve fed Ed the data he needed, and Ed took that data—nothing personally identifiable—and went to work. At his presentation to the board in March, he showed us how much he was able to tease out. Concept proved, and the board has given him the green light to continue. I include one of his informative charts in this article...

An interesting question Ed sought to answer was whether the dark site was a prime driver of membership in the Society. Perhaps betraying a little bias, Ed told the board that he expected the answer to be a resounding yes. What he found instead was that fewer than half of HAS members were eligible to access the site. Possible answers to this surprising finding raise more questions, ones we think we can solve and others we’re unlikely to find answers to without asking directly.

Observatory Open House and Picnic—don’t miss it
Want to take a look through one of the observatory telescopes? Here’s your chance. Get to the Observatory Open House and Picnic Saturday April 11. More info on the website calendar. It’s bring your own K-Cups for the Keurig machine but otherwise food and drink provided if you RSVP. So come out for the picnic, get to know your neighbors, and check out the bluebonnets along the way.

April a good time for us early bird observers
April is a good time to be an early bird observer with two nice events. First a partial lunar eclipse in Houston, umbra at 04:03 a.m. Saturday April 4. Then the Lyrid meteor shower, and who doesn’t love a meteor shower? Check your usual sources, but it peaks in the hours before dawn April 22 and April 23.