I was at the family homestead in Florida recently. They say you can’t go home again, but not much has changed over the years in that part of Florida Citrus Country. The skies were still dark enough to see my mom’s beloved Milky Way from the back porch and the winter constellations were spectacular. So were the summer ones.

A great season to observe

The clear skies found me lost in time and space watching constellations from succeeding seasons travel the night skies. When the summer Milky Way arose, it reminded me that it would soon be Messier Marathon season.

The full moon blots out the very best nights this year, but it’s still an excellent season for observing. Skip the marathon sprint for 2016 and use the night of March 5/6 to capture those Messier objects missing from your Astronomical League list. Almost all of them are visible from our latitude.

Stephen Jones has scheduled another of his popular Novice Labs on the crescent moon night of March 12. Incidentally, Mar 5 and 12 are both good nights to complete the HAS Texas 45 in a single night. You can read a firsthand account about the program by the most recent awardee, Steve Goldberg, elsewhere in this GuideStar.

All the committees have been hard at play—take a look. 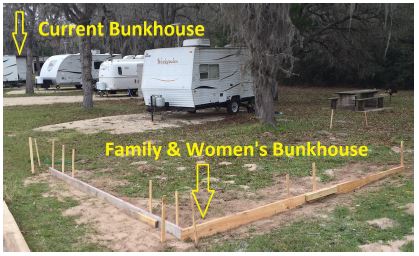 It seems we just announced plans for the new family and women’s bunkhouse when ground was broken on the slab. In truth this project has been on the drawing board for years, and I’m truly honored to see it come to fruition.

Special thanks go to Bill Kowalczyk, Allen Wilkerson, Amelia Goldberg, Mike Edstrom, the Observatory Committee, and the vision of the Board of Directors to fund it.

Bill K says it won’t be long before we’ll be having a good old fashioned barn raising to put up the frame.

Henry Gonzalez hosted the first official East Houston Urban Observing group at Double Bayou Park in Anahuac, TX. Congrats, Henry! I’ve observed in those parts and it is dark. If you’re on the east side, make plans to get to the next one.

In January Amelia and I sent women members an email announcing a new club within a club at HAS, a special interest group for women. This is a social group as well as a place for hands on astronomy. Make sure you’re in the know by sending an email to [email protected] with your request to join HAS-Women. Steve Goldberg will verify your membership and add you to the list. If your spouse shares your email account, Steve can handle that, too. One of our first events might be something for the “barn raising” of our new bunkhouse!

The Art & Science of Astronomy

March is museum month for Outreach featuring the art and science of astronomy. On March 19 at the Contemporary Arts Museum Houston, astronomers Amelia Goldberg, Bob Menius, and Will Young will exhibit their astronomy-themed artwork at the museum the entire week leading up to Family Fun Day at CAMH. This is a daytime event and all manner of scopes will be on hand.

Another event you won’t want to miss is the re-opening of the Burke Baker Planetarium on March 26. It’s members night for the Houston Museum of Natural Science and HAS will be on hand with telescopes to show folks the real thing on the front plaza of the museum building. Way to go Joe Khalaf!

It’s always a great season for astronomy at the HAS.