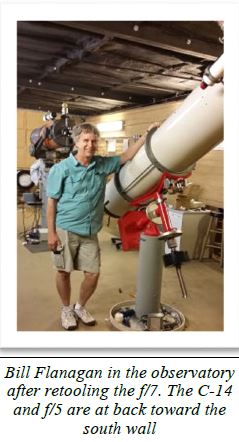 We have many accomplished members in HAS. We have many dedicated volunteers as well. But we have only a few longtime members who we can depend on when times get rough. Bill Flanagan is one of them.

Bill is an officer of the society and serves as Secretary again this year. He joined HAS in 1986 and his service record includes Treasurer, Director, Advanced Special Interest Group chair, and Telescope chair. He organizes a variety of outreach activities including Fathers & Flashlights and the Houston Arboretum Star Parties and is an in demand speaker. Outside of HAS, he regularly serves as master of ceremonies for the afternoon talks at the Texas Star Party and authors observing programs for the Eldorado Star Party (ESP). In the photo at left, you see he’s also an active member of the observatory committee.

As for tough times, Bill has pulled us out of the lurch many times when a key position went vacant. We can’t thank him enough.

Is this your year? Join the leadership team! We have the most fun money can't buy.


HAS Logo Shirts! You know you want them. But who wants to pay print-on-demand prices? Who wants to ware house (and pay for) scores of unpurchased merchandise because we ordered the wrong size? Our crack team is working on a solution that everyone can buy into. To get economy of scale, we need to pre-order and pay upfront like a soon-to-be-released book from Amazon. That way we can get what might cost $40 for less, a lot less. And for us ladies, women’s sizing! No more arm holes that drop to the waist. Stay tuned.
The Nominating Committee Needs You. VP John Haynes chairs the Nominating Committee and wants your insight on the team. Do answer his call to help with this most important function: soliciting our future leaders. Check out his article elsewhere in this GuideStar.
Aaron Clevenson to speak about Astronomy Day 2015. Yes, this year’s A-Day Director and NHAC President Aaron Clevenson will go over everything you ever wanted to know about participating in Astronomy Day. He’ll have a short presentation during the business meeting before Larry Mitchell’s talk September 4th. You won’t want to miss either one.
Dark Skies over Fulshear. Debbie Moran was invited by Fulshear City Councilwoman Romana Ridge and light pollution activist Cindy Luongo Cassidy to attend a Fulshear city council meeting at which Cindy made an invited presentation about the benefits of fully shielded lighting. Everyone in the audience who spoke did so in favor of the ordinance and many complained about lighting that was currently bothering them in their homes. They also wanted to protect the skies and complained about how washed out the sky is to the east from Houston's lighting. Though Debbie does not have any direct activities with Fulshear, she was introduced around due to her work in Houston.
Update to the Texas 45. A minor update to the HAS Texas 45 observing program is on the website now. There are no new objects or rules changes. A little tweaking was made to make the program more readable.
Has your e-mail address changed? Or maybe you’ve moved. Let’s not lose touch. Send Membership Chair Steve Fast, your new address at Steve Fast.
The skies have cleared. I hope you’ve been able to take advantage of the star parties at the site or at George Bush Park. Clear skies!