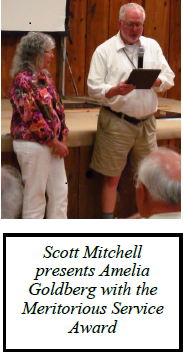 HAS member Amelia Goldberg was honored by the Texas Star Party for Meritorious Service to the event over many years. Amelia has been responsible for housing registration for the TSP for many years and has run the registration desk during the event. She also received the designation of ‘Honorary Board Member,’ only the second person every given that recognition. The first was Deborah Byrd (earthsky.org), the founder of the TSP.

Many HAS Members Attend the Texas Star Party

John Waggoner’s list includes several galaxies (including the antennae), planetary nebulae (including the Cat Eye). If you want to get a copy of the list, it’s available at the Texas Star Party web site (texasstarparty.org). You won’t get the pin for the list unless you observe the objects at the Texas Star Party. My ‘Shallow Sky’ object this month is one from John’s list — the Blue Racquetball, also known as NGC6572. It seemed to be a more difficult list this time around and there were at least two of the objects that were very challenging for me to see in my small telescope.