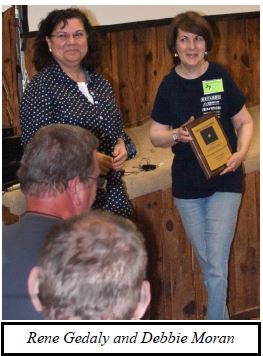 by Rene Gedaly, HAS President

I hope you're planning to get to the June membership meetings. June is when we hear from Greater Houston’s junior and senior high school students who won awards in astronomy. These are the awards HAS confers each year at the annual Science & Engineering Fair. There's something that rekindles the wonder in all of us seeing the next generation so passionate about science, especially when it involves some aspect of astronomy. These days it's all about STEM, and astronomy has always been a fun and more accessible doorway into the sciences. Come out and support these budding science enthusiasts. You’re sure to learn something, too.

We also get to hear about the doings at the Texas Star Party. Steve Goldberg is back with his TSP Wrap Up which promises to be a visual feast. I'm really looking forward to it so I can see what—and who—I missed. Many, many HAS members attended this year with a significant number volunteering and giving talks. Although I did attend TSP 2015, it was only for a few nights and this year I stayed offsite. That may work for some, but it's just not the same as being in the thick of it, day and night. There's no comparison either to being able to stay up all night knowing your bed is just a short stumble away. Are there wall outlets in the bunkhouses for CPAPs?

One very special event I did not miss was the Omega Centauri Award. In case you don't know, the Omega Centauri is awarded to that person who has most demonstrated dedication to the outreach, promotion, and education of the public in astronomy. It’s a really big deal. There were many fine nominees, but this year's recipient is an in-demand speaker on astronomy in schools and at civic events, a champion defender against light pollution, a lead science fair judge, takes astronomy outreach to a global audience, and is a speaker at TSP, in fact, gave a talk at the first ever TSP AstroLearn Workshop, geared to the novice observer. You guessed it. This year it was my distinct privilege as president of the Houston Astronomical Society to present the 2015 Omega Centauri Award to our own Debbie Moran.

And while you're at the meeting, be sure to check out the speaker backdrop banners. You'll see one with the HAS logo behind Steve Fast as you pick up your name badge. A gift from an anonymous donor, it was the brainchild of Rob Morehead, our video guy. (Now weren’t the videos a great idea? Approaching 2000 member views and counting.) Rob thought astronomy themed banners would dress up the place, give us some much needed branding, and serve as a fitting backdrop to highlight the talent, knowledge, and accomplishments of our speakers. In case you don’t recognize its orientation, the background photo printed across all three banners is a blowup of a Hubble image taken in 2007—a segment of The Veil Nebula in Cygnus.

We also need to give a shout out to FastSigns of San Antonio. Christine Knight, the print shop owner and spouse of member Chris Ober, did a beautiful job. If you've been to the dark site, you've seen other examples of her work, many donated by FastSigns, such as the address signs on the entrance and exit gates, the logo on the side of the observatory, the notices at the exit and entrances, the emergency procedure on the Dob shed, the reflective exit signs... And the memorial plaque for Bob Rogers, past director of the HAS Observatory. The bronze plaque unveiled at last year’s Founders’ Day event was also procured from them. HAS members are the best.