That's Special Interest Groups or SIGs. We've had them before, in a galaxy far, far away. Now they're back and I'm especially excited about a new one being introduced by our Field Trip & Observing guy, Stephen Jones. Don’t miss his announcement elsewhere in this GuideStar.

A perennial question of astronomy groups everywhere has been how to get youth involved in our hobby. My answer has always been to go where they live, and if you have something to offer, they'll come visit you. It's a working strategy for HAS. They live online, of course. And we offer plenty.

Karla Pale, our HAS intern, is giving her senior thesis presentation on “Indirect Methods of Detecting Dark Matter” April 25 at The School of the Woods. We were hoping to have Karla speak to us at UH but she’s leaving soon on her way to university. As her field advisor, I’ll be attending. Maybe I can do Facebook live.

Clay Parenti is a ninth grader at Westchester Academy for International Studies and has been active in astronomy, picking up youth awards along the way. You’ve seen or read about 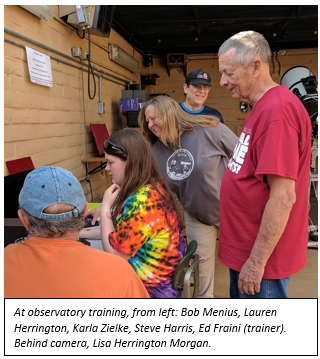 him in previous GuideStars. Clay spent a very special spring break this year. Check out how later in this issue.

Edgar Najera is a college student at Lone Star – University Park and is also president of his astronomy club there. He spent a couple of nights over spring break at the HAS Observatory, staying in the men's bunkhouse. Edgar learned observatory operations in the first revamped training class in March. You may recall seeing a photo of another LSC student at observatory training last month, Megan Galvan at the C14.

Sophie Schenkel has been at the dark site often over the past year for the Novice Observing and WSIG Telescope labs plus is a member of the 2017 Texas45 observing class along with mom Ingrid. They are so intent on graduating and earning their award certificates and pins, they’ve asked how they can cover observations of winter objects they’ve missed and summer objects they may not be able to get to. Yes, it is definitely possible to see list objects outside their given season. Winter list objects, for example, can be seen in the fall by observing in the hours before sunrise instead of in the evening.

Brand new member Lauren Herrington brought her mom to the second observatory training class. Mom had to come along because Lauren is just 15. They came early to help with bunkhouse work day, broke away to attend class in the observatory, and later that evening got to the Novice Observing Lab on the field. Stephen Jones was so impressed by this accomplished young astronomer that he put her and her 8” scope to work showing beginning observers the sky. If you've been to the dark site lately, or to a recent outreach event, or to a meeting at UH, you've seen Lauren and mom Lisa. They're the ones in tie-dye.

We have many student members in HAS; 55 in fact. If I haven't mentioned your name, trust me, I've seen many of you and know you’re active in outreach and such. Come say hi and get as involved as you like or as your schedule allows. Astronomy is a great hobby and we're glad you're a part of it. Who knows? You could grow up to be another HAS legacy, like Field Trip & Observing Chair Stephen Jones.