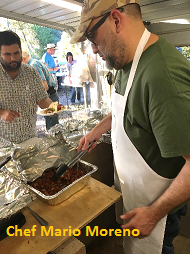 Every observing pad was filled. So were most of the private observatories. We spilled over toward the south tree line. That must’ve been where the caravan of 20 cars parked. The HAS Observatory was standing room only with lines out the door. The swap meet was in full swing into the first light window. The Women's SIG had a phenomenal turnout and a great time learning the night skies—telescopes and binoculars provided. Overnight camping was so full we should have opened Logan's Cove (more about that next time.) Darth Vader helped me emcee the shout outs to Stephen and Mario. And the food. Yes, the food. Amazing. 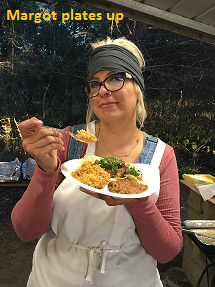 This kind of event doesn't just happen. It takes many hands and lots of heart. The Picnic & Open House is an annual event put on by Field Trip & Observing. Somehow chairperson Stephen Jones one-ups himself each year. New this year are Mario & Margot Moreno who served up restaurant quality fajitas and fixings, Steve Munsey who kick started our long-awaited Swap Meet, and Amelia Goldberg, Jayne Lambert, and Andrea Kowalczyk who helped me with the Women’s SIG Telescope & Observing Lab. 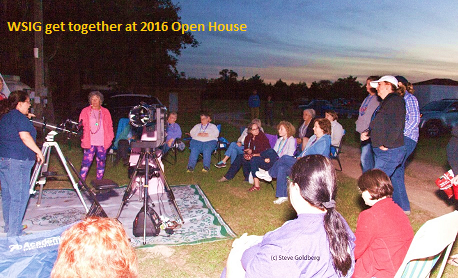 What a fabulous time with some great observing. Some of us got to see the Milky Way for the very first time. There’s more, new members. Much, much more. See you back at the dark site soon.

Can you believe it? The HAS Facebook group has completed its inaugural year with 180 members and counting. It's the place to be to share astro news, photos, and club gossip. Contact [email protected] and get added to the group.

Our meeting host, the University of Houston, now has a student astronomy club and a refurbished observatory right on top of the Science & Research 1 building where we meet. Another reason to join the HAS Facebook group is to keep up-to-date with UH Observatory happenings. Or go directly to https://m.facebook.com/UHAstronomy/.

In lieu of the December membership meeting at UH, we will have a holiday party at the Trini Mendenhall Community Center. It's potluck so bring your family favorites—the club will provide a spiral ham and turkey. Drinks, too. No, not those kinds of drinks. More to come about the program and festivities on the website, Netslyder email list, and Facebook.