Lots of activity this month. It’s getting hard to keep up. Speaking of which, a lot of mowing goes on at the dark site in summer. I think I’ve seen every member of the Observatory Committee on one mower or another. Including yours truly. Yes, Allen Wilkerson gave me training on the finishing mower. Thanks, Allen. I think. 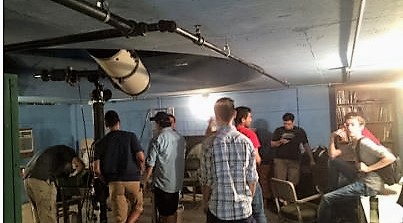 About a year ago one of our young members, Daniel Vrolik, asked director Jessica Kingsley what happened to the observatory atop the UH Science building. Jessica promptly informed the board and got the ball rolling. Now Susan Street, the former observatory operator, a group of current UH physics majors, and Clayton Jeter are putting in all the sweat and tears to get the UH observatory operational. Dr. Pinsky, one of our advisers, has the primary and secondary mirrors out for recoating. The plan is to re-open in the fall.

Website
Ever wonder about that article you saw on the website that’s gone missing? The WebTech Team led by Mark Ferraz now has a website archive of past articles. See the Archive tab.

Outreach
What do you do about these short summer nights? Hold solar and lunar events of course. Coming up in July we have the Solar Series Art Exhibition at Silver Street Studios and an Astronomy 101 talk with lunar observing at Second Baptist for 50 or so visiting students from China. Contact [email protected] and Joe Khalaf will hook you up.

Observatory Light Rules
New to the club but afraid of breaking the light rules? Fear no more. Ana Taylor, a weekend denizen of the dark site and Women’s SIG member, has volunteered to get you started off right. During twilight she’ll be stopping by to help make sure you don’t inadvertently spill light from your vehicle.

Girl Scouts at the Observatory

The Women’s SIG hosted 30 scouts and 10 parents overnight at the HAS Observatory. What fun! Cherie Pepper, a former girl scout who’s gone through the ranks, was invaluable help as was Sherry Irby, who brought her Chi-Weenies Dewey and Libby, a big hit. Equipped with red lights, the girls toured Mike Edstrom’s private imaging observatory, stopped at Amelia Goldberg’s blinged out pink telescope, and then made their way to the Observatory where Chris Ober, Steve Goldberg, and I were on hand to show them Jupiter, Mars, Saturn, Albireo, the Stargate, etc., etc. We also located objects naked eye as the girls learned to use a star map, loads of fun. As promised, I also showed the ambitious—girls and parents—how to operate a telescope. They were directed to choose a bright object, find it using the Telrad on the f/5, focus it in the eyepiece, and then tell me what they saw. There are no words to describe their faces as they discovered they had located Mars and Saturn by accident—all by themselves.