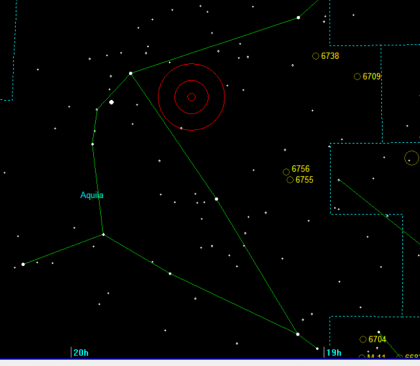 NGC 6804 was discovered in 1791 by the great William Herschel, though he logged it as a cluster for some obscure reason (possibly faint stars around the periphery reminding him of a globular?).  It is of similar size to our July object, the Turtle Nebula in Hercules, though it is noticeably fainter.  It should still be easily visible in medium-sized telescopes.  My personal log of this object is from the 2015 HAS picnic using the 12.5” f/7 reflector that used to be housed in the HAS Observatory at the Dark Site (since been replaced by the 12” RC).  In the f/7 at 314x I noted, “Oval; central star visible with direct vision; star to the side of the nebula is brighter; annular; strong response to OIII filter.”  Photographs of the object indicate a two-shelled structure, though I did not see this with the 12.5” on that occasion.  Reports on the internet indicate that from good skies NGC 6804 is at least visible in as small as a 4” telescope.  This object is on the Astronomical League’s Planetary Nebula program object list.  If you enjoy this object, that list may be a good observing project for you.