Near the beginning of the Bible, the book Genesis contains the story of Sodom and Gamorrah. These “cities of the plain” were so wicked that God obliterated them. The story goes that God sent angels to tell Lot, the nephew of Abraham, to leave the city.

“The angels urged Lot saying ‘Arise, take your wife an your two daughters who are here, lest you be consumed in punishment of the city. … The Lord rained upon Sodom and Gamorrah brimstone and fire from the Lord out of heaven. And he overthrew those cities, and all upon the plain, and all the inhabitants of the cities, and that which grew upon the ground. But his wife looked back from behind him and she became a pillar of salt. … And he looked toward Sodom and Gamorrah and toward all the land of the plain and beheld, and lo, the smoke of the country sent up as the smoke of a furnace.’” King James Bible, Genesis chapter 19, verses 15, 23-26, 28.

Similar stories are found in the Hebrew Bible and the Islamic Quran. For many years, archeologists have sought evidence of this event in the lower Jordan River valley, but convincing proof remained elusive. Wars and earthquakes are common disasters in the region, but nothing quite fit the Biblical story. Until now. A team of 21 scientists, led by Ted. E. Bunch of Northern Arizona University recently published an article in the journal Scientific Reports1, which presents evidence that a Tunguska-like meteor airburst annihilated cities of the lower Jordan Valley approximately 3600 years ago. The report details the results of investigations over 15 years at the site Tall el-Hammam, located about 10 kilometers from the north shore of the Dead Sea (see figure). Tall (also “tell”) is a term for an ancient, artificial mound (see figure). Tall el-Hammam was the site of a thriving Bronze Age city of several thousand inhabitants, probably the largest city in the region. It was suddenly abandoned around 3600 years ago and never rebuilt. It contained a large palace complex and acropolis with sturdy defensive walls 11-15 meters in height on foundations 4 m thick, but city structures, including the walls were almost completely torn down. What happened to the city? Why was it abandoned and never rebuilt?

The key to the mystery was the discovery of a peculiar layer, up to 1.5 meters thick, at Tall el-Hamman dig sites. Most of the layer contains pulverized debris including melted and unmelted mudbrick fragments, melted and unmelted roofing clay, ash, charcoal, burned seeds, burned textiles, bones, plaster fragments, broken and melted pottery shards. This is topped by thin layers of windblown fine debris, charcoal, and ash. The authors call this the “destruction layer” and they interpret that it records the destruction of the Bronze Age city. Radiocarbon dating of charcoal from this layer gives an age of 1650 BCE (BCE, “before common era” is an archeological standard and means years before 1950 or about 3650 years before present). This layer is unusual and not found at other archeological sites outside the area. The layer contains no weapons, such as sling stones or arrow points, so it does not represent destruction by war. 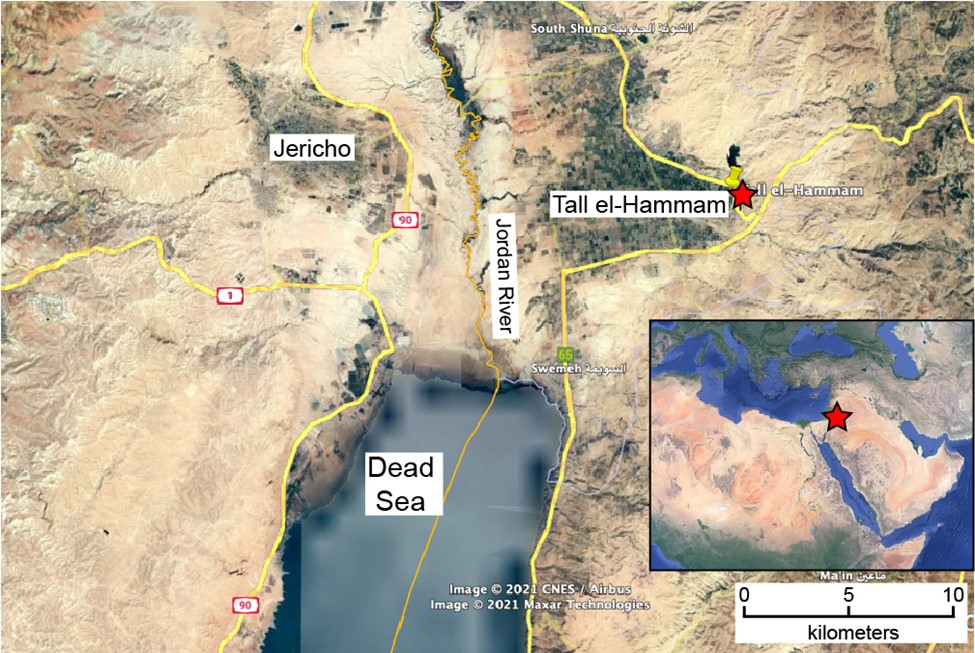 The destruction layer gives several important clues to the event that created it. Most debris is the pulverized remnants of buildings and walls that once stood on the hill. The destruction of those constructions was almost complete. Few whole bricks have been found and virtually all bricks forming the city walls are no longer in place. The ruin is mainly just a foundation. The layer contains directional debris trains, mainly consisting of pot shards aligned southwest to northeast and spread up to 10 meters. No pots were found in working position. A heavy millstone was found, toppled to the northwest of its pedestal. Debris was preferentially piled on the northwest sides of walls with greater destruction on the opposite side. This evidence implies hypersonic winds from the southwest. Human bones were found in the destruction layer, but only as small fragments. The inhabitants of Tall el-Hammam were pulverized and entombed in the destruction layer.

Multiple lines of evidence indicate extreme high temperatures and pressures. The surface of pot shards were found to be melted. Mudbrick surfaces and roofing clay were also melted. The debris contains carbonate and metal spherules, which are tiny spherical particles formed by melting. The carbonate spherules are thought to originate from melted plaster, which came from the building interiors. Metal spherules formed from building materials and soil and indicate temperatures greater than 2000°C, much higher than possible with Bronze Age technology. Carbonized building materials associated with abundant charcoal and ash indicate burning. Investigators also found “shocked quartz”, a fractured form of the mineral quartz that is found at impact sites and attributed to breakage caused by a high-pressure wave. High pressure was also indicated by microscopic diamond-like carbon particles (“diamondoids”). Altogether, multiple lines of evidence imply that the city was smashed by a wave of high temperature and pressure. The authors draw parallels to the blast caused by the Tunguska meteor air blast in 1908, which flattened forests over an area more than 2000 km2 in Siberia. That blast is thought to have occurred when a meteor several tens of meters in diameter entered the Earth’s atmosphere, heated, and exploded with a force equivalent to 10-30 megatons of TNT, about 1000-2000 times the size of the Hiroshima atomic bomb blast (see figure).

Tall el-Hammam was not the only city destroyed by the explosion. Nearby Jericho was also a casualty as were many other settlements in the lower Jordan Valley. Study authors overlayed the pattern of tree destruction from the Tunguska explosion and find that it neatly covers the area of lower Jordan Valley where destruction occurred. Oddly, the cities of the plain never recovered. In cases of war or earthquakes, cities are quickly rebuilt on the prior foundations, but there was a gap of 300-600 years in resettlement. The authors attribute this abandonment to salt poisoning. They found that the destruction layer contains high salt concentrations, which they surmise were caused by mobilization and concentration of salty surface sediments or Dead Sea water. This salt would have made it impossible to grow grains and other salt intolerant crops until enough time had passed to allow rains to leach away the salt. Once most fertile spot in the Jordan Valley, the region became unable to support agriculture and hence cities.

Authors of the Tall el-Hammam study pointed out that their study cannot confirm that the site is the former location of Sodom or Gamorrah. The timing is right and the location is right (Tall el-Hammam was already one of the sites considered as a candidate for Sodom). It us up to the reader to decide whether to connect the dots. 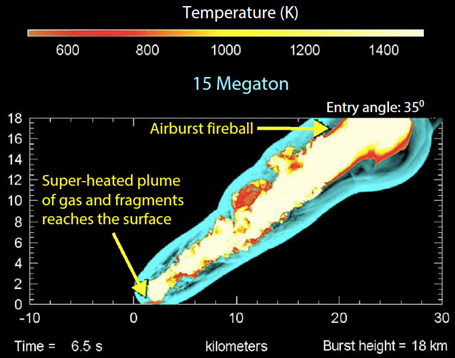 Airburst model showing temperatures for the Tunguska airburst. The meteor enters the atmosphere at an angle of 35° and explodes 18 kilometers above the surface. The blast wave continues downward, impacting the surface about 6.5 seconds later. (M. Boslough, Sandia National Laboratory, 2016).