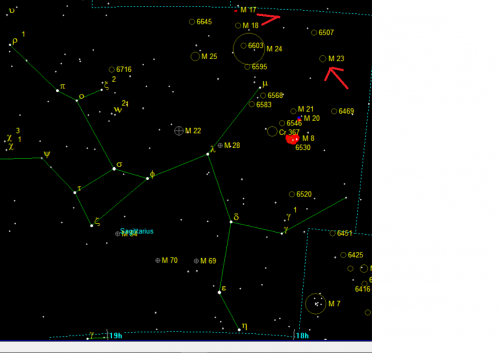 The loneliness of M24 and its dark surroundings is somewhat intriguing.  The cluster is intermediate in age at around 300 million years old.  Surveys have found 30 variable stars ranging in magnitudes from 10 to 17. Seven of the stars are eclipsing binaries including two apparent W UMa contact binaries and one eclipsing binary.  The remaining 23 variables are likely semi-regular variable stars.

Messier notes: (Observed June 20, 1764) Star cluster between the tip of the bow of Sagittarius and the right foot of Ophiuchus very close to the star Flamsteed 65 Ophiuchi. The stars in this cluster are very close together.

More messier objects (15) are in Sagittarius than any other constellation.  The mythical Archer stands vigil in the direction of the of the center of our Galaxy, the most crowded area containing stars, dust, and gas. No wonder that this parcel of sky yields the greatest variety and concentration of star clusters and nebulae, including M17, which is a combination of both.  With the exception of the Orion Nebula (M42), M17 is the brightest galactic nebula visible to observers in mid-northern latitudes.

The Hubble Space Telescope imaged a swath of the nebula’s interior 3 light years wide, revealing it to be a turbulent sea of nebulous splendor with a crib of newborn stars surrounded by blankets of glowing gas.  Intense ultraviolet radiation fleeing from these hot, young stars not only causes the nebula to fluoresce but also eats away at the cold gas from which these stars were formed.  The intense heat and pressure cause some material to stream away from the surface, thus masking background structures.

Messier notes: (Observed June 3, 1764) Streak of light without stars, five to six minutes long, spindle-shaped, and rather like the belt of Andromeda, but very faint.

M18 is a sparsely populated open star cluster only 1 degree south of M17, near the extreme northern edge of the small Sagittarius Star Cloud (M24).  M18 lies in the Sagittarius spiral arm about 70 light years from the galactic plane and has an age of 30 million years.   Its brightest main sequence member is of spectral type B.  Trumpler rates the object as a poorly populated detached cluster of bright and faint stars with little central concentration.

Messier: (Observed March June 3, 1764) Cluster of faint stars slightly below… (M17), surrounded by faint nebulosity…resolved with a good telescope only.

September Bonus: Saturn and Jupiter in a 6-month journey to a conjunction culminating in December.

Our two most observable planets begin a long-term hook-up in the early evenings beginning late June.