This is a series of columns primarily revolving around observing the Messier Catalogue.  The intent is to provide the reader a sampling of the Messier objects each month that are most visible in the time frame the column is published.  Hence, these deep sky objects should be easily identifiable in and around the month of October.  Some months may have a special treat in addition to the Messier Objects.  Check the trailer.

Without question, M22 should be called “The Great Sagittarius Cluster.” It is a bonfire of 500,000 stars that blazes at magnitude 5.2 and measures 32’ across – about the apparent diameter of the full Moon.  Among globulars, it ranks third only to Omega Centauri and 47 Tucanae in brightness and apparent size.

Messier notes: (Observed June 5, 1764) Nebula, below the elliptic, between the head and bow of Sagittarius, close to the seventh-magnitude star Flamsteed 25 Sagittarii.  This nebula is circular, does not contain any stars, and is clearly visible in a simple refractor. 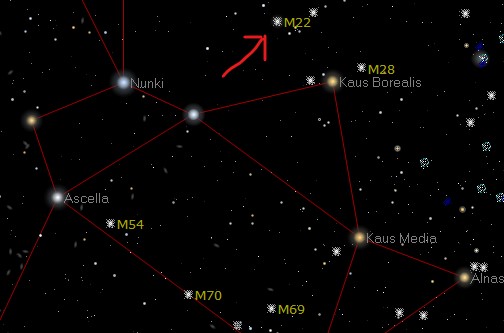 M52 is a great open cluster…for binoculars…not because of its bright starlight…but because the 7th magnitude cluster is merely a large, uniform glow.  Through 10 x 50 binoculars, the cluster looks like a double star in a haze.  The binocular view belies the fact that M52 is an extraordinarily rich telescopic cluster. About 60 million years young, it measures 24 light years in true linear extent and contains nearly 200 members brighter than 15th magnitude.  Telescopically, you will be immediately struck by the presence of an 8th magnitude topaz field star on the cluster’s southwestern edge.  This star all but leaps out at you, as if trying to steal the show.  It is an imposter, however, not an actual member of the cluster, which has an overall bluish hue.

NGC note:  Cluster, large, rich, much compressed in the middle, round, stars from 9th to 13th magnitude. 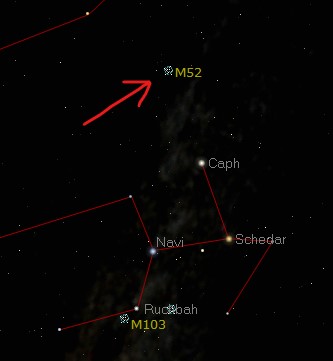 In long-exposure photographs, M33 a member of our local group of galaxies, looks like an enormous spiral with innumerable stars clinging to wildly spinning arms. But, with a diameter of 54,000 lightyears, you could fit two and half M33s in the disk of M31. In fact, M33 may be a satellite galaxy of M31, orbiting it just like the Moon does Earth.

M33 harbors one of the most massive black hole binary systems known, M33 X-7, which has a mass of 16 solar masses and every 3.5 days orbits an O star of 70 solar masses.

Messier: (Observed August 24, 1764) Nebula discovered between the head of the northern Fish in Pisces and Triangulum, close to a sixth magnitude star. The nebula’s light is whitish, and almost even in density.

NGC: Remarkable, extremely bright, extremely large, round, very gradually brighter in the middle to a nucleus. 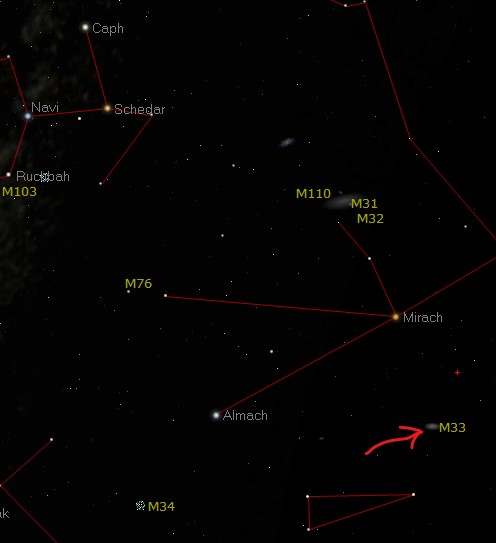 October Bonus: Saturn and Jupiter continue in a 6-month journey to a conjunction culminating in December. Mars on its way up.

Our two most observable planets begin a long-term hook-up in the early evenings beginning late June.  Mars closing in to a spectacular October show magnitude -2.6.