This is a series of columns primarily revolving around observing the Messier Catalogue.  The intent is to provide the reader a sampling of the Messier objects each month that are most visible in the time frame the column is published.  Hence, these deep sky objects should be easily identifiable in and around the month of November.  Some months may have a special treat in addition to the Messier Objects.  Check the trailer. 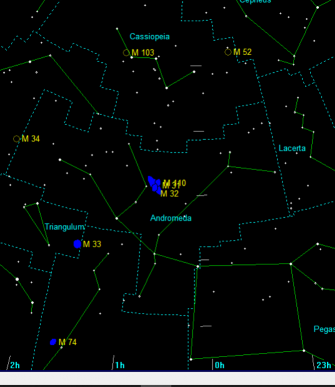 Messier notes: (Observed August 3, 1764) The beautiful Nebula in the belt of Andromeda shaped like a spindle.  Messier examined it with several instruments but was unable to see any stars.  It resembles two cones or pyramids of light joined at their bases, and the axis of which lies northwest to southeast.  The two points of lights are perhaps some 40 minutes of arc apart. The common base of the two pyramids is about 15 minutes.

To the true romantic of Astronomy, M31 will always be known as the “Great Nebula in Andromeda” – a name bestowed on it before spectroscopy revealed that this luminous mist was not the protoplasmic soup of a solar system in formation, but a distant island universe like our own Milky Way.  An enormous pinwheel of dust and gas, the Andromeda Galaxy contains some 300 billion stars spread across 130,000 lightyears.  It is rushing towards us at 185 miles per second.

M31 is among the largest galaxies known and is by far the largest member of our local group of galaxies, which includes our Milky Way and some two dozen smaller systems.

Messier notes: (Observed August 3, 1764) Small nebula without stars, below and a few minutes away from the nebula in the belt of Andromeda.  This small nebula is circular, its light fainter than that in the belt.

NGC note:  Remarkable, very bright, large round, suddenly much brighter in the middle to a nucleus

Our attention is turned the final addition to the Messier catalogue, an object recommended for inclusion by Kenneth Jones as recently as 1967.  M110 is the larger of the two prominent satellite galaxies that flank the majestic Andromeda Galaxy (M31).  M110 hovers northwest of M31, appearing as a fuzzy, visual glow with a total magnitude of 8.0, but has a much fainter surface brightness of 13.9 because of its large size.  High magnification reveals a highly mottled nucleus, with the portion closest to M31 detached by an obvious dust lane.

October Bonus: Saturn and Jupiter continue in a 6-month journey to a conjunction culminating in December.

Our two most observable planets heading towards a spectacular long-term hook-up in the early evenings beginning late June.