This is the third installment of a series of columns primarily revolving around observing the Messier Catalogue.  The intent is to provide the reader a small sampling of the Messier objects each month that are most visible in the time frame the column is published.  Hence, these deep sky objects should be easily identifiable in and around the month of May.  Some months, like May, will have a special treat in addition to the Messier Objects.  Check the trailer.

Interesting note: 1) Apparently ole Charlie Messier was not superstitious by our standards.  The dates of these observations were all on Friday, April 13th, 1781.  A very productive night indeed. 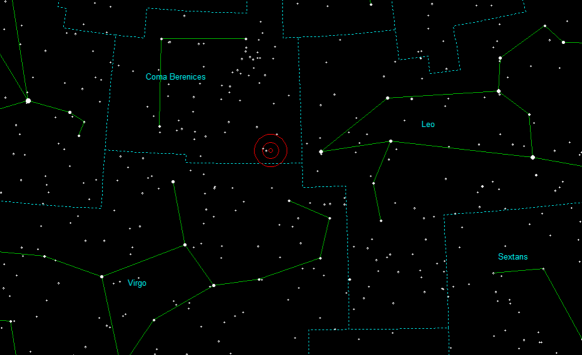 Observed by Messier April 13, 1781 as a nebula without a star, whose luminosity is very faint, above the northern wing of Virgo.

The nearly edge-on galaxy M98 in Coma Berenices offers the small telescope user more detail to hunt down than most face-on spiral and elliptical systems in this region.  Its pale, slender disk, hook-like extensions, and dark dust make it a soothing, yet enticing sight.

Another April 13, 1781 Messier observation as a nebula without a star, whose luminosity is very dim, but slightly clearer than M98 (previous).

NGC note: Very remarkable.  William and John Herschel described it as bright, large, round, gradually brighter in the middle, mottled.  Rosse and William Lassell saw it as a three-branched spiral.

Third time is charmed… observed by Messier April 13, 1781, a nebula without a star.

M100 is the brightest spiral galaxy in the Virgo cluster, displaying primarily its two grand design arms.  Faint secondary arms lie to the east of the nucleus.

NGC note: Very remarkable, pretty faint, very large, round, very gradually, then suddenly, much brighter in the middle towards a mottled nucleus. 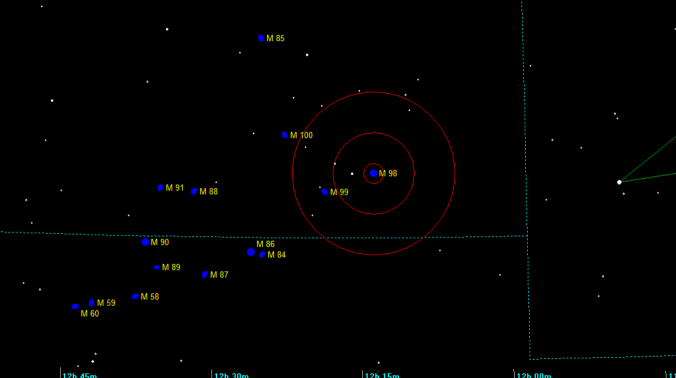 How’s about a conjunction between Venus and Mercury on May 21/22?  Their closest approach occurs during the early morning of May 22, so for U.S. astronomers, the best time to observe is during the previous evening of May 21.  They will stand less than one degree apart one hour after sunset.  At this point, Mercury shines at a magnitude of -0.6 and Venus at magnitude -4.4.