The birth of the messier catalogue: Without question, the messier catalogue contains some of the most spectacular deep-sky objects visible in small telescopes, but their inclusion is largely circumstantial.  Messier never intended to create a list of the most spectacular objects in the heavens. His was a catalogue of “comet masqueraders” as the late comet discoverer Leslie Peltier called them.  Messier started the list in 1758 after he encountered a stationary fuzzy patch near Zeta Tauri (M1) while he was looking for the Comet of 1758.  As David Levy notes in Messier and His Catalogue, “Realizing he had been fooled by the sky’s version of a practical joke, Messier began to build a catalogue of what he called “embarrassing objects.”

So, we benefit from his somewhat painful, though eye-opening (pun intended) experience.  We are in the middle of the early spring section of Messier’s works. 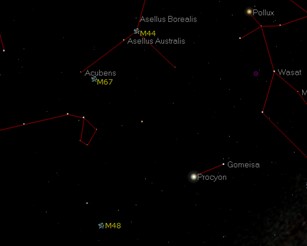 The most intriguing “missing” Messier object, M48 is now believed to be NGC 2548, a knitted stellar gathering of about 80 stars between magnitude 8 and 13 located in a rather inconspicuous region of Hydra where it borders Monoceros.

Messier’s recorded position for M48 is off by about 5 degrees in declination, placing it due north of NGC 2548, a spot where there are no clusters at all.

Messier notes: (Observed February 19, 1771) Cluster of very faint stars, without nebulosity.  This cluster is close to three stars that lie at the root of the tail of Monoceros.

At 5 billion years of age, it is one of the most ancient open clusters known.  M67 contains some 500 stars within its roughly 20 light year diameter. One of the peculiar and perhaps most intriguing aspects of M67 is that its chemical composition is similar to that of the Sun. The similarity in composition and age is so close that several authors have indicated that in M67, its stars are the best-ever Solar analogues ever discovered.

M67 (Observed April 6, 1780) Cluster of faint stars with nebulosity, below the southern claw of Cancer. 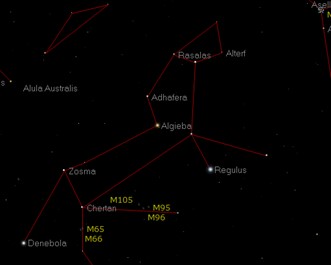 Leo’s M65 and M66 probably rank second only to M81 and M82 as sought-after galaxy pairs.  Located about halfway between Theta and Iota Leonis and separated by only 20’, M65 and M66 are both visible in 10 X 50 binoculars under a dark sky.  Look for two slightly oval glows, with M66 appearing a little more prominent.

M95 and M96, two spiral systems in Leo, fit comfortably in a single field of view with 7 x 50 binoculars. Huddling with them in the same field is the elliptical galaxy M105.  They lie just 8 degrees west of another galaxy trio consisting of M65, M66 and NGC 3628.  All belong to a small cluster of galaxies known as the Leo Galaxy Group, who members are speeding away from us at 800 miles per second. 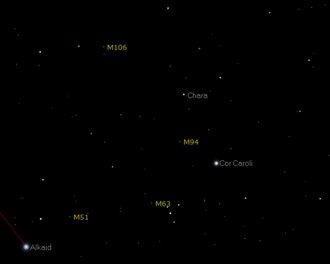 M94 exhibits a very soft, beautiful glow that adorns the high northern sky between the two brightest stars in Canes Venatici, the Hunting Dogs, lying between Boötes and Ursa Major. It has been described to be a comet-like nebula; a fine, pale-white object with evident symptoms of being a compressed cluster of small stars.  It has been confused at times as a globular cluster since it brightens dramatically towards the core.

Messier notes: (Observed March 24, 1781) Nebula without a star.  The center is bright and the nebulosity not very diffuse.

NGC note: Very bright, irregularly round; very suddenly very much brighter in the middle to an extremely bright nucleus; mottled.