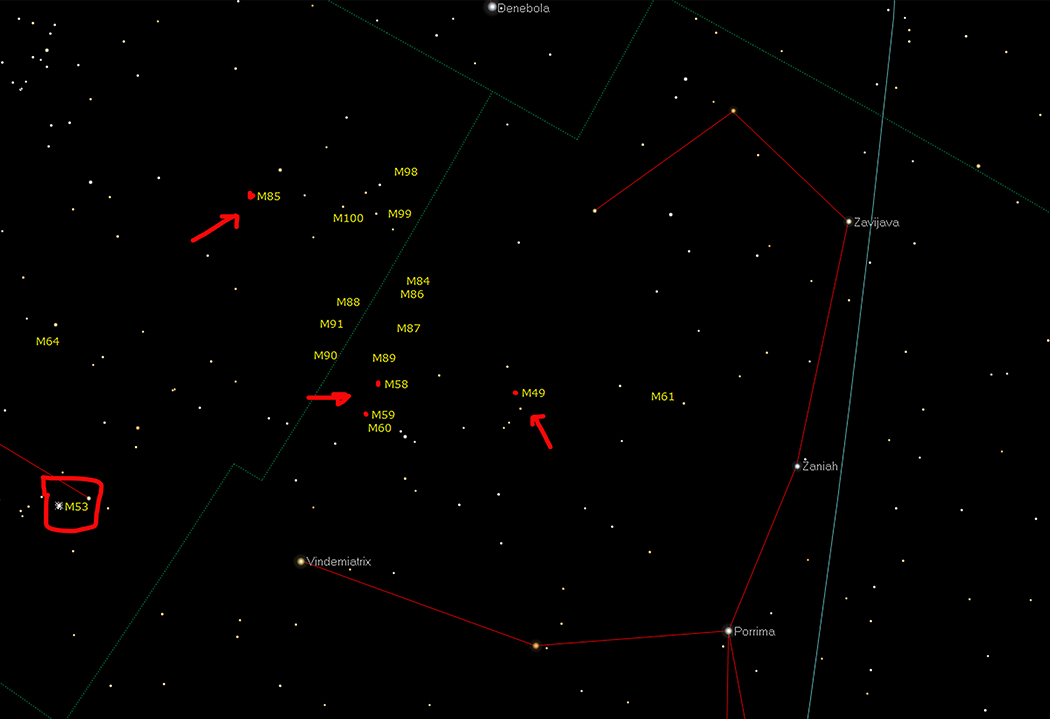 It would be fruitless to question the observing ability of the man described by King Louis XV as “the ferret of comets.”  Messier was highly respected for his keen eye and attention to detail.  His expertise was not limited to the visual search for comets, as he was an equally skilled observer of, among other things, the planets, stellar occultations, and sunspots.  Still, one must wonder how Messier could have missed so many relatively bright nebulous objects during his comet hunts.  Anyone who takes the time to sweep the sky with a telescope around the famed M-objects cannot help but chance upon some nebulae and clusters that were not included in his catalogue, apparently escaping his gaze.  BUT DID THEY?

One possible answer: many of the objects he identified were too obviously “not comet-like” …but how does one then explain the Pleiades (M 45)?  Another possibility: he restricted his search to small telescopes.   The mystery continues….

M49 is an enormous elliptical system that lurks at the center of a subcluster of galaxies, called the Virgo Cloud, in the heart of the vast Virgo Cluster – a rich collection of objects spanning 20 million light-years of space.  In the early 1990s, ROSAT (an Earth-orbiting x-ray observatory) imaged M49 and revealed that it possesses a halo of hot (10,000,000 K) gas.

NGC note: Very bright, large, round, much brighter in the middle, mottled.

Messier notes: (Observed February 19, 1771).  Nebula discovered close to the star p Virginis.  This is rather difficult to observe with a simple 3.5 foot refractor.  M. Messier compared the comet of 1779 with this cluster on 22 and 23 April: the comet and the cluster had the same luminosity.  Messier plotted this nebula on the chart showing the path of this comet, which will appear in the Academy Volume for the same year 1779. Observed again 10 April 1781.

William Herschel described M53 as one of the most beautiful sights in the heavens.  Still, this whopping 220-light-year-wide sphere of stars is an unsung hero among globulars for small telescopes. Perhaps that is because it sits on the fringe of the Coma-Virgo cluster of galaxies, like a flower on the edge of a forest of redwoods.

Messier notes: Observed February 26, 1777: Nebula without stars discovered below and close to Coma Berenices, close to the star Flamsteed 42 in that constellation. This nebula is circular and conspicuous. The comet of 1779 was directly compared with this nebula and Messier plotted it on the chart for that comet, which was published in the Academy Volume of 1779.  Observed again 13 April 1781.  It resembles the nebula that lies below Lepus.

Modestly bright and unassuming, M58 is, nonetheless, among the most prominent Messier galaxies in the Virgo Cluster of galaxies.  Spanning 108,000 light-years, this mixed spiral galaxy has about the same mass as our Milky Way Galaxy, or about half that of the Andromeda Galaxy.  We see it receding from us at about 940 miles per second.

Messier notes: (Observed April 15, 1779) Very faint nebula discovered in Virgo.  The slightest illumination of the micrometer crosshairs causes it to disappear.  Messier plotted it on the chart for the comet of 1779.

NGC note: Bright, large, irregularly round, very much brighter in the middle, mottled.

Although M85 lies in Coma Berenices, it belongs to the Virgo cloud of galaxies.  This peculiar lenticular system has some similarities to M84 in Virgo. M84 and M85 both are ~55 million light-years distant, and both shine at 9th magnitude.  They have masses of 500 billion and 400 billion solar masses, respectively.  But, unlike M84, M85 is a gas-poor galaxy that displays low-contrast spiral structure.

Messier notes: (Observed March 18, 1781) Nebula without a star, above and close to the ear of corn in Virgo, between two stars in Coma Berenices, Flamsteed 11 and 14.  This nebula is very faint.

NGC notes:  Very bright, pretty large, round, with a brighter middle, star to the north west.

*Sky Tools offers an observability scale of 1 – 6, with 1 being “Obvious” and 6 being “Very Challenging”.  This particular rating scale I use is based on a Celestron SCT 8 Evolution telescope at the HAS dark site on a moonless night.