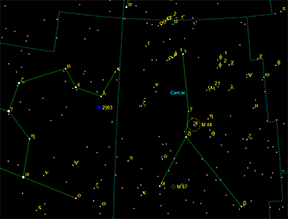 The sucky winter, hopefully, is behind us.  During the past couple of weeks, we have had some nice weather and a couple of really good nights for observing.  We now get to move into the Messier early spring portion of his catalogue.

A TRIBUTE: Charles Messier passed on April 12, 1817, at the ripe old age of 86.  During his lifetime, he suffered through the French Revolution and was reduced to poverty.  He was finally restored to prominence as a member of the Academy of Sciences and Bureau des Longitude, after the revolution had run its course. Ironically, Messier wanted to be known for his list of cometary discoveries, but ultimately his list of objects that were not comets earned him immortality.

Cancer is the only constellation whose brightest stars are fainter than a Messier object within its boundaries.  In fact, if it were not for the mystifying cloudy appearance of open cluster M44, which draws your gaze to the surrounding 4th-magnitude stars, it is conceivable that dim Cancer might have been overlooked by ancient stargazers or possibly envisioned differently.  To the naked eye, the 3rd-magnitude glow of M44 looks like the bearded head of a tailless comet.

Messier notes: (Observed March 4, 1769) Cluster of stars known as the nebula in Cancer. 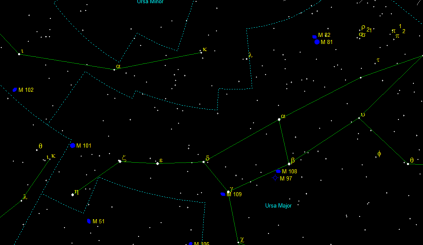 Unquestionably, M81 and M82 are the most popular close pair of galaxies in the heavens. M81 and M82 lie about 2 degrees east of 24 Ursae Majoris – a magnitude 4.5 star about a fist-width northwest of Alpha Ursae Majoris, which marks the Bear’s ears.  If one has access to a dark sky, use binoculars first to locate the galaxy pair. The telescopic view is top-drawer: M81 is an egg-shaped, 7th magnitude oval, almost as large as the full Moon.  M82, magnitude 8.4, is a cigar-shaped ellipse.  The two galaxies moved past one another about 300 million years ago.  Now, they continue to part going their own separate ways.

Messier notes: (M 81 Observed February 9, 1781) Nebula close to the ear of Ursa Majoris.  Nebula is slightly oval, the center is light, and it is easily visible with a simple three and a half-foot refractor. 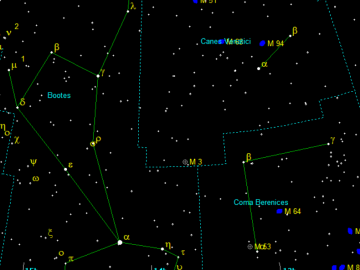 M3 Is another bright and stunning globular star cluster that presents some visual challenges, including seeing it with the unaided eye.  Discovered in 1764, it was Charlie’s first official discovery; M1 and M2 having both been spotted before he came along.  M3, however, may have spurred him to begin a systematic and persistent search for other uncatalogued nebulous objects. The “new” cluster remained a “mottled glow” until 1784, when German-born English astronomer William Hershel resolved M3 into a “beautiful cluster of stars.”

M3 Messier notes: (Observed May 3, 1764) Nebula discovered between Boötes and Canes Venatici.  It does not contain any stars, the center is bright, and its light decreases imperceptibly away from the center. 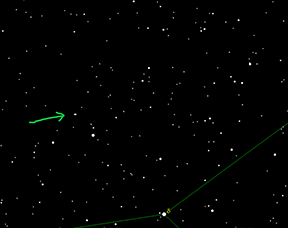 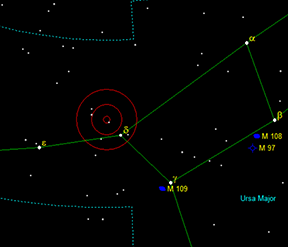 M 40 is a pair of close stars of nearly equal magnitude that John Hevelius (1611-1687) had described as “a nebula above the back {of Ursa Major}” in his star catalogue.  When Messier saw the object plotted, he sought it out.  Messier tried to locate it at the coordinates given, but only identified the two stars.  He decided to include it in his catalogue since the stars appeared as a nebula in any telescope under two feet.

Messier notes: (Observed October 24, 1764) Two stars very close to one another and very faint, located at the very root of the tail of Ursa Major.  They are difficult to detect in a simple six-foot refractor.