On 5 May 2018, NASA blasted the $828M InSight (INterior exploration using Seismic Investigations, Gravity, and Heat Transport) lander towards Mars with the audacious goal of gathering direct seismic evidence of the interior structure of the red planet. INSIGHT landed on 26 November 2018, deployed its seismic sensors, and began recording marsquake data in February of 2019. In the 23 July issue of the journal Science, INSIGHT seismic teams, a group of more than 40 scientists from around the globe, report preliminary results of the seismic experiment, giving the first direct measurements of the structure of another terrestrial planet. These results show planetary layering similar to Earth, but with several significant differences. 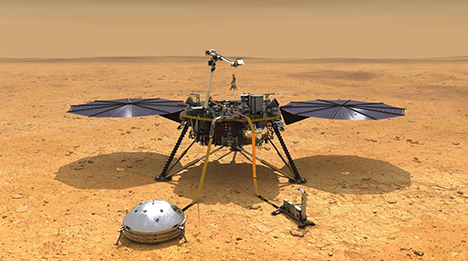 Artist’s rendition of Mars INSIGHT lander. The SEIS experiment is the silver dome on the ground in the left foreground. In the right foreground is the thermal probe. The robotic arm, atop the lander, deployed the experiments. (NASA)

After six weeks of surveying its surroundings and system checks, the INSIGHT robotic arm extracted the SEIS (Seismic Experiment for Interior Structure) sensor package from the spacecraft and placed it on the ground a short distance away for direct contact with the surface (see figure) and to lessen environmental noise from the lander. It then covered the SEIS sensors with a dome-shaped shield to insulate the instrument from wind and thermal changes. The seismometer detects microscopic ground motions caused by seismic waves propagating outward from marsquakes. Since deployment, SEIS detected about 700 marsquakes, with the largest having a magnitude equivalent to a Richter scale 4.0 earthquake (a human observer would only notice this level of shaking near the epicenter) but most are much smaller. Data show that the Mars seismic environment is quiet, which helps the SEIS team detect small marsquake signals. By comparison, on Earth the oceans and atmosphere create significant background noise (called microseisms) that sometimes mask faint earthquake wave arrivals. This allowed the SEIS instrument to detect weak waves from tiny temblors on faults thousands of kilometers distant. 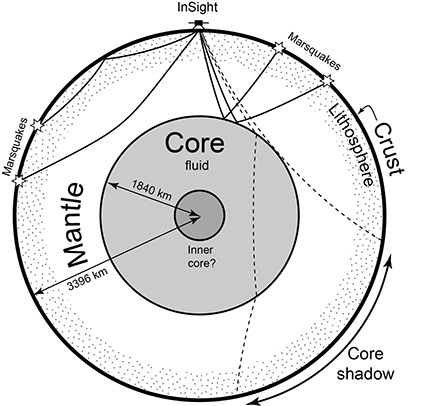 Layered structure of Mars inferred from the SEIS experiment and determination of the core diameter. Half of the planet is occupied by the liquid metallic core, made of iron-nickel and lighter elements. The crust is a thin rind on the surface. In between is the mantle, which is made of dense silicate rocks. Example seismic wave raypaths are shown by thick lines. Rays from two marsquakes on the right bounce off the core-mantle boundary, allowing determination of its depth and the character of the underlying core (liquid). Two marsquakes on the left have raypaths that travel through the mid-and upper mantle. Two dashed lines show raypaths for primary (p-waves) with slightly different angles. One just grazes the core-mantle boundary and the other is refracted deep into the core by the change in seismic properties. This geometry means that no p-wave originating in between can reach the seismometer, forming a core shadow zone.

As expected, seismic results indicate that Mars has three main layers (see figure), just like Earth: a core made up of dense metallic material, a mantle made up of dense silicate rock, and a crust made up of light silicate rock. Nevertheless, the layering displays important differences compared with Earth. Seismic waves bounced off the core, deep inside the planet, showing that it has a radius of 1,830 km (1,137 miles), about half that of Mars 3,386 kilometer (2,116 mile) radius. This value is larger than expected from Mars’ known mass and moment of inertia, implying a mean density of only about 6,000 kilograms per cubic meter, compared to about double that for the Earth’s core. The low density indicates that the iron-nickel core must be alloyed with significantly lower density siderophile elements, such as sulfur. The seismic team also inferred that Mars core is liquid from the strength of seismic signals bounced off the top of that layer. Although seismic data from Earth show that the core has two layers, with a liquid outer core and solid inner core, InSight scientists are currently unable to determine whether Mars’ core has a similar solid center.

Mars mantle layer is similar to that of Earth, but seismic wave speeds indicate that the Martian mantle material is like that of the upper Earth mantle, without the higher density lower mantle material of Earth. This lack of denser mantle means that Mars mantle is less insulating, so that the core would have cooled more quickly. This result fits the idea that convection in the liquid core is weak today, resulting in a weak Mars magnetic field. Greater heat flowing out of the early core probably created a stronger magnetic field in the past, as inferred from surface magnetic anomalies, caused by core material convection that was more vigorous. A gradual reduction of seismic wave speed in the upper 400-600 km (250-375 miles) suggest a rigid, thermal boundary layer, similar to the lithosphere (crust plus some of the upper mantle) on Earth, which is typically less than 100 km thick. This result fits with previous predictions that Mar’s lithosphere is much thicker than Earth and also explains its lack of plate tectonics. Studies of seismic waves traveling near the surface indicate that the thickness of the Martian crust, comprised of the least dense rocks at the surface, has a thickness of 22-70 kilometers (14-44 miles), similar to continents on Earth.

The new Martian seismic results are a remarkable achievement and not just because scientists had to design a seismometer that could fly to Mars and be remotely deployed and operated at a distance of hundreds of millions of kilometers. SEIS team scientists had to overcome the disadvantage of having only one seismometer, which makes determination of marsquake distances difficult (earthquakes are triangulated from multiple seismometers). They also found that marsquake waves reverberate in the crust, masking weaker seismic waves. Moreover, the planet’s seismic structure causes about half of its surface to be in the shadow of the core, which means that that SEIS instrument cannot detect many marsquakes so the number observed is less than the global total. Nevertheless, InSight results are preliminary and based on only a few well-determined earthquakes, so scientists will refine their models as more data become available. Moreover, the new results are reshaping planetologists’ view of Mars structure, which will lead to new ideas about the formation and evolution of the red planet.