The Summer Triangle is high in the sky after sunset this month for observers in the Northern Hemisphere, its component stars seemingly brighter than before, as they have risen out of the thick, murky air low on the horizon and into the crisper skies overhead. Deneb, while still bright when lower in the sky, now positively sparkles overhead as night begins. What makes Deneb special, in addition to being one of the three points of the Summer Triangle? Its brilliance has stirred the imaginations of people for thousands of years!

Deneb is the brightest star in Cygnus the Swan and is positioned next to a striking region of the Milky Way, almost as a guidepost. The ancient Chinese tale of the Cowherd (Niulang) and the Weaver Girl (Zhinü) - represented by the stars Altair and Vega - also features Deneb. In this tale the two lovers are cast apart to either side of the Milky Way, but once a year a magical bridge made of helpful magpies – marked by Deneb – allows the lovers to meet. Deneb has inspired many tales since and is a staple setting of many science fiction stories, including several notable episodes of Star Trek.

Astronomers have learned quite a bit about this star in recent years, though much is still not fully understood – in part because of its intense brightness. The distance to Deneb from our Sun was measured by the ESA’s Hipparcos mission and estimated to be about 2,600 light years. Later analysis of the same data suggested Deneb may be much closer: about 1,500 light years away. However, the follow-up mission to Hipparcos, Gaia, is unable to make distance measurements to this star! Deneb, along with a handful of other especially brilliant stars, is too bright to be accurately measured by the satellite’s ultra-sensitive instruments.

Deneb is unusually vivid, especially given its distance. Generally, most of the brightest stars seen from Earth are within a few dozen to a few hundred light years away, but Deneb stands out by being thousands of light years distant! In fact, Deneb ranks among the top twenty brightest night time stars (at #19) and is easily the most distant star in that list. Its luminosity is fantastic but uncertain, since its exact distance is also unclear. What is known about Deneb is that it’s a blue-white supergiant star that is furiously fusing its massive stocks of thermonuclear fuel and producing enough energy to make this star somewhere between 50,000 and 190,000 times brighter than our Sun if they were viewed at the same distance! The party won’t last much longer; in a few million years, Deneb will exhaust its fuel and end its stellar life in a massive supernova, but the exact details of how this will occur, as with other vital details about this star, remain unclear.

Discover more about brilliant stars and their mysteries at nasa.gov. 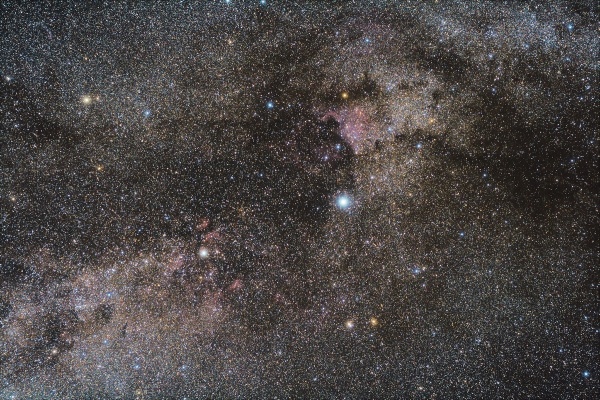 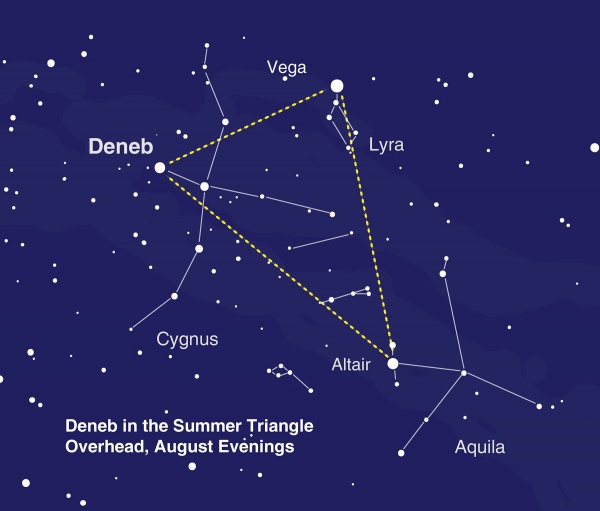 Spot Vega and the other stars of the Summer Triangle by looking straight up after sunset in August!