I first met Lynn Dippel at the Fall 2007 Fort McKavett star party held by the Johnson Space Center Astronomical Society. Early one morning there, Lynn casually walked over to our group (4 of us) that was huddled around the Coleman stove as we were cooking our breakfast. Was it the smell of that bacon that brought her our direction, or possibly curious about our uncovered telescopes that were displayed? Either way, she introduced herself and the rest is history. This gal has never met a stranger. Instantly we were all chatting to her about her work in astronomy and how she became involved it.

Since that morning, I’ve become fascinated in her celestial sketching. Some folks record their data into a log book, some record via a CCD…. But Lynn does it the hard way; she records her info with pencil and sketchbook. Her art work is stunning. The more she sketches an object, the more she sees into the object(s) she tells me.

If you have a glimmer of wanting to sketch at the eyepiece, and actually see more of an elusive object, then let’s hear what Lynn has to tell us about her work at the scope. Here’s Lynn…

I was born on May 15, 1963, in Brownwood, TX. I went to Woodland Heights Elementary School until 1973, when we moved to Houston, TX. I attended Meadow Wood Elementary and Spring Branch Jr. High Schools. In 1975 I was diagnosed with a Juvenile Astrocytoma (brain tumor), it returned in 1978. It was cured with radiation in 1978.

We moved back to Brownwood in 1981 were I graduated from Brownwood High School. I then attended Weatherford Jr. College and received an Associates Arts degree in drafting. I went to North Texas University in Denton, TX. I had a hard time there so I had to drop out after 1 semester. I then came home to Brownwood to where I worked minimum wage jobs.

I moved back to Denton in 1992 where I worked at Kroger’s. I then applied to the University of North Texas (behind my parents back) I got help from the Office of Disabilities and the Texas Rehabilitation and I was able to graduate. My parents said that I couldn’t pass math or science, but with the degree that I took, Bachelor of Applied Arts & Science, I was able to graduate in 1996 with a 2.8 GPA. I was unable to find a job in my degree field, Radio/TV & Film. 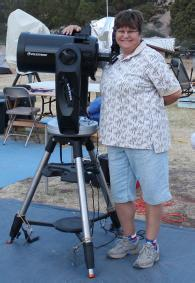 In 2007 I got my Celestron CPC 9.25” XLT Telescope. I thought about doing astrophotography, but when I saw what it entails, I opted for sketching. It is more pleasing and I learn to see more when I sketch.

Clayton: Hi Lynn… great to have you here. I have to ask first off, how and why did you get into sketching of faint celestial objects? Was it a real challenge to learn?

Lynn: I got into sketching after watching some of the Johnson Space Center Astronomical Society members that do astrophotography, I asked what kind of equipment it takes and how much I would have to put into taking pictures. I found that it was too much for my pocket book.

I asked one of the members what I should start looking at and was told to start with the Messier Objects and to record them with a small sketch and when finished with all 110 objects that I would receive a certificate. I started with a spiral notebook and a mechanical pencil. I had sketched about 50 objects and then I looked at my notebook and saw ugly pencil marks and not astronomy objects. So I did some research on internet and Goggled astronomy sketching and came up with a lot of sites: Cloudy Nights forum, Belt of Venus, to mention a few.

Clayton: I would think that sketching with a clock drive telescope makes the job much easier. Have you tried your art work with a telescope such as a Dobsonian without a tracking device? I would think nudging a scope all night for one sketch could be work; higher powers only increase the problem.

Lynn: Yes, I have tried a dobsonian. I didn’t get too far because the owner wanted it back. Clock drives are a lot easier because I can look into the eyepiece and step back, do some sketching, then step back and still be on the object. Also, I can sit back and take a small break and then get up and start sketching again.

Clayton: Do you recommend a book or program on celestial sketching? Where do we begin?

Lynn: The book I like to use is Astronomical Sketching: A Step–by-Step Introduction, by Richard Handy, David Moody, Jeremy Perez, Erika Rix and Sol Robbins. I also frequent the Jeremy Perez web site, Belt of Venus at perezmedia.net and cloudynights.com, another book that I use is The Year-Round Messier Marathon Field Guide.

Clayton: I’ve seen you at Fort McKavett and TSP, have you attended other star parties? What’s your plans for 2012? 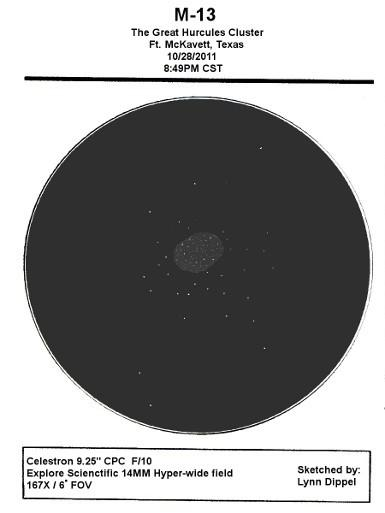 Lynn: No, I haven’t attended any other star parties. I need to venture out. Clayton has been trying to get me to go to the Eldorado Star Party and OkieTex, but it seems they occur when JSCAS has their star party. I would like to attend those sometime. My 2012 plans will hopefully include the spring & fall JSCAS Star Party. At this time I do not know if I can volunteer for 2012 TSP.

Clayton: Are you a visual observer only? Any ideas of jumping into astrophotography?

Lynn: I’m still thinking about astrophotography as for right now I’m strictly a visual observer. I like to look and see what is out there to study and learn.

Lynn:At Fort McKavett and TSP and wherever I can set up my scope. I did some sketching at my brother’s ranch in Menard when I lived out there. I haven’t set up my telescope here in San Angelo yet …still looking for a good dark place.

Clayton:Are you satisfied with a 9 ¼” SCT? Have you gotten the itch for more aperture?

Lynn:I’m very satisfied with my Celestron CPC 9.25”. Of course I would love to have more aperture.

Clayton:It seems the majority of folks that are into amateur astronomy are men. Are you seeing more ladies in the last few years on the observing fields?

Lynn:Yes I have, we have 2 new ladies that have started to come to Ft McKavett Star Party.

Clayton:Do you have an amateur observing mentor?

Lynn:Yes I do. I have several mentors. They are Ken & Lisa Lester, Becky & Shane Ramotowski and Al Kelly. Everyone in JSCAS has been real nice and helpful to me.

Clayton: How do you envision your astronomy in the next few years? What do you want to do?

Lynn: I’ll still have my 9.25 CPC and still sketching. I want to keep on learning the sky and become a better sketcher.

Clayton: Do you have any helpful advice to pass on to observers just starting out in astronomy?

Lynn: Yes, go to an Astronomy club star party and start asking questions and look thru the different types of telescopes. Do not buy a telescope till you have talked and figured out what you want to pursue, sketching, astrophotography or just visual observering. I had bought an Orion 4.5 Short Tube Reflector telescope and I set it up (not the correct way) and observed thru it until I went to my first JSCAS Star Party and was shown how to properly set it up. I found out that it was not the right telescope for a comfortable view. I talked to members and found the Celestron 9.25 CPC telescope was the right one for me.

You don’t have to be an artist to sketch, just sketch the way you see the object. I sketch the major object and stars in the field of view. I don’t try and sketch everything that I see in an object. I would like to, but I’m not that patient enough.

Clayton: Is there an email address that you have that a Houston Astronomical Society member could contact you for an additional question or two?

Lynn: You can reach me at: [see the PDF newsletter]

Clayton: Thanks Lynn for taking the time to share your interest and thoughts within our HAS newsletter, ‘The Guide Star’. We wish you luck with all of your astronomy interests. Please come visit our society when in the Houston area, we’d love to see you.

Lynn: Thank you for letting me do this interview Clayton. I have always been looking toward the skies; I think it is because of Gordon Cooper blasting off in his Mercury 7 capsule on my birthday.

Clear skies to everyone!