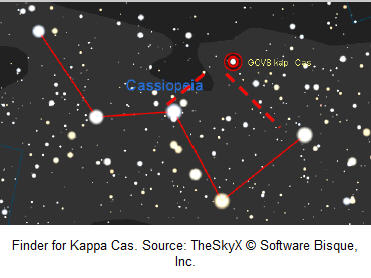 by Bill Pellerin, editor of the HAS GuideStar

I happened upon an article about the star recently indicating that in infrared images there’s a significant bow shock wave associated with the star. This shock wave occurs because the star is moving so quickly through the interstellar medium. When the magnetic field and stellar wind of the star collides with this medium the medium warms up and glows in the infrared. The picture above was taken with the Spitzer Space Telescope. The star shines mostly in light at the other end of the spectrum, ultraviolet light. If we consider all the energy being given off by the star we find that its energy production is 420,000 times that of our sun.

The mass of Kappa Cas is substantially higher than our sun as well. In fact, Kappa Cas is a late life star mostly fusing helium to carbon and oxygen. Astronomers expect the star to go supernova one day, but not in our lifetimes. 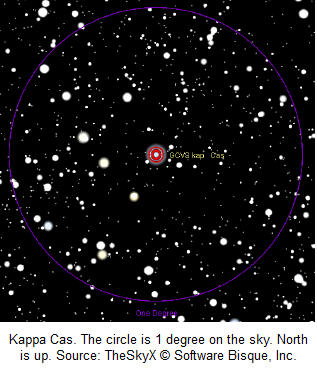 The glowing gas in the image is approximately 4 light years ahead of the star, so the distance between the star and the bow shock is about the same as the distance (24 trillion miles) between our sun and Proxima Centauri, the nearest star to us.

Visually, you won’t see the bow shock, but you’ll know it’s there and you’ll know that this star is moving very quickly.

Astronomy is as much about what you know about an object as it is about what you see through your telescopes. Every object has at least one story associated with it; some objects have many stories.