The Smiling Cyclops...Asterism by Clayton Jeter / Will Young. 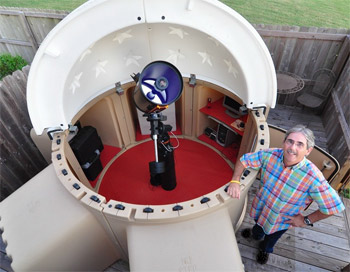 Here’s a recent article by Will Young (I interviewed him here back in June 2012) that I found while surfing www.cloudynights.com. As you might remember, Will is the current club president of the Astronomical Society of South-East Texas (ASSET: www.asset-astronomer.org ) in Beaumont. This amateur is a die-hard visual guy and you’ll understand why as you read his delightful article below.

When an amateur astronomer wants to show someone something they have never seen before, a few showpiece objects are used. Most are M or Messier objects and while those are great sights, an equally spectacular one missed the list. Most people know it as the Double Cluster, Caldwell 14 or NGC 869 and NGC 884. It sits northwest of Perseus and consists of two similar open clusters. Both clusters are relatively nearby so the entire sight can easily fill an eyepiece.

I love showing the double cluster to people because it has a multitude of different types of stars and shows how stars behave soon after they are born. I enjoy giving people perspective and explaining how far away these objects are. To learn that the light that hits their eye left those stars about seven to ten thousand years ago can give a significant frame of reference. I try to give them a feel for which one is closer and which one is further away but that sometimes proves difficult. I could just say up or down but that only works if someone has his or her head at the exact angle as mine. Also assuming they interpret “middleish” or “just to the left of” the same. Luckily, I recognized a shape in one of the clusters. The inside of NGC869 resembles a smiling Cyclops. While referencing the object as the "Smiling Cyclops" I’ve found it’s rather easy to point the asterism out, even to the most inexperienced observers. So I figured I would write about it.

The asterism lies in NGC 869, almost directly in the center. The eye is star V520, a B class supergiant that also happens to be a variable star, hence the “V” in its name. It varies in brightness from about magnitude +6.55 to +6.66. On a magnitude scale, the closer you are to zero, the brighter the object. Counter intuitive to common thinking, a negative number in the magnitude scale would be an extremely bright object. 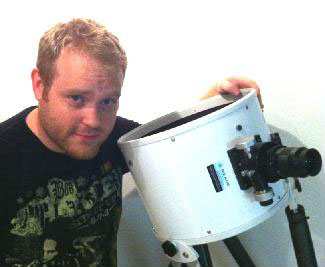 For example, our Sun is approximately -27th magnitude. The smile shape sits just to the east and consists of five or so magnitude +9 stars in an obvious smile pattern. Once you see this asterism, there is no unseeing it as my experience has shown. I find myself looking for it every time I view the Double Cluster. It really does steal the show.

Above the Cyclops is a pattern of stars that almost resembles horns or spiky hair. Opposite of the smile, the stars are in perfect alignment for this effect. I have used terms as colorful as Don King hair or deer antlers to describe this area to fellow observers.

Everyone who sees the Cyclops itself has no problem picking out the headgear he is wearing. It is almost too perfect; as if the universe had a sense of humor in aligning these stars.

The whole reasoning behind naming and locating this asterism is to illustrate to others which cluster I am talking about in referencing the two. As I said before, I try to give them a sense of perspective on which cluster is closer and which one is further away. Now that I have an easily locatable source of reference, I can tell them that NGC 869 is much closer at 6.8kly than NGC 884, which lies at about 9.6kly. This puts almost three thousand light years between the two objects. To give my fellow astronomers some perspective, the Orion Nebula lies about 1,500 light years or 1.5kly away. Orion’s great nebula spans a respectable 35ly across. NGC 869 is nearly the same but since it is almost double the distance, it appears smaller. The ages of the clusters are young among open clusters. 869 is aged at about 5.6 million years old and 884 is estimated to be about 3.4 million years old. This just means that these stars located in these clusters were approximately born that long ago. Due to stellar winds and time, the nebulous gasses have shed from these groups. Neither cluster has remnants of the nebula they were born in, which helps to determine their age. It is estimated that more than 300 blue white super giant stars in each cluster. There is also strong evidence to suggest these clusters are moving directly toward us at about 22km/s, which equates to about 14 miles per second. Assuming this, a few million years from now, the Double Cluster will be quite larger and brighter in the skies than they are today.

The Double Cluster is truly a breathtaking sight in a decent telescope, even for jaded and seasoned observers. You can see a multitude of different and rare stars; the beauty of our galaxy easily displayed for us to view and of course a smiling one-eyed prankster. I challenge all who read this to observe the asterism and show it to their friends and colleagues as a test to their imagination. Who knows, maybe someone will see something I missed.

Clayton: Thanks Will for taking the time to share your interest and thoughts again within our HAS newsletter, ‘The Guide Star’. We wish you luck with all of your astronomy interests. Please come visit our society when in the Houston area, we’d love to see you.

Will: And clear skies to you and your club.

Clayton L. Jeter is an avid SCT visual observer and a longtime member of the Houston Astronomical Society. Contact him at: (See the PDF newsletter)